Rainbow Burqa at ‪#‎JeSuisCharlie‬ Vigil in SF
The French consulate on Kearny Street in San Francisco's financial district tonight was the site for a vigil in solidarity with the people of France and free expression advocates, in the aftermath of gunmen slaughtering 12 people today in Paris.
A tweet this afternoon asked people to show up at 7 pm to show sympathy with the friends and families of the editors and cartoonists at ‪#‎CharlieHebdo‬, and police officers on the scene. 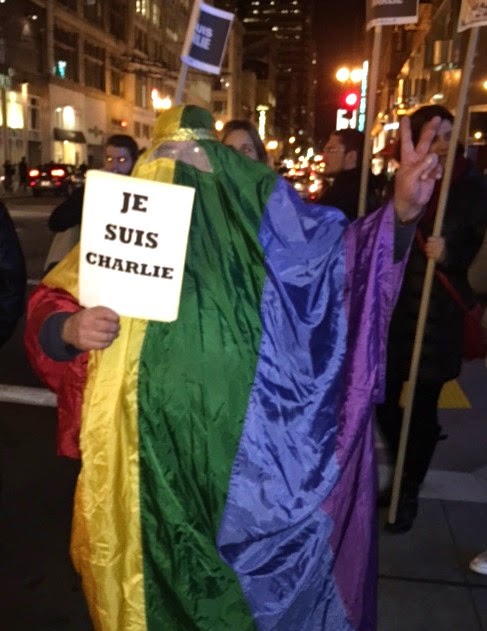 I printed a Je Suis Charlie sign, got out the rainbow burqa and rode my bike to the consulate. When first arriving, I saw the cops had corralled the crowd into a too-tight space in one lane of traffic. The San Francisco police officers soon closed the block to vehicular traffic and a dense mass of people occupied the streets. 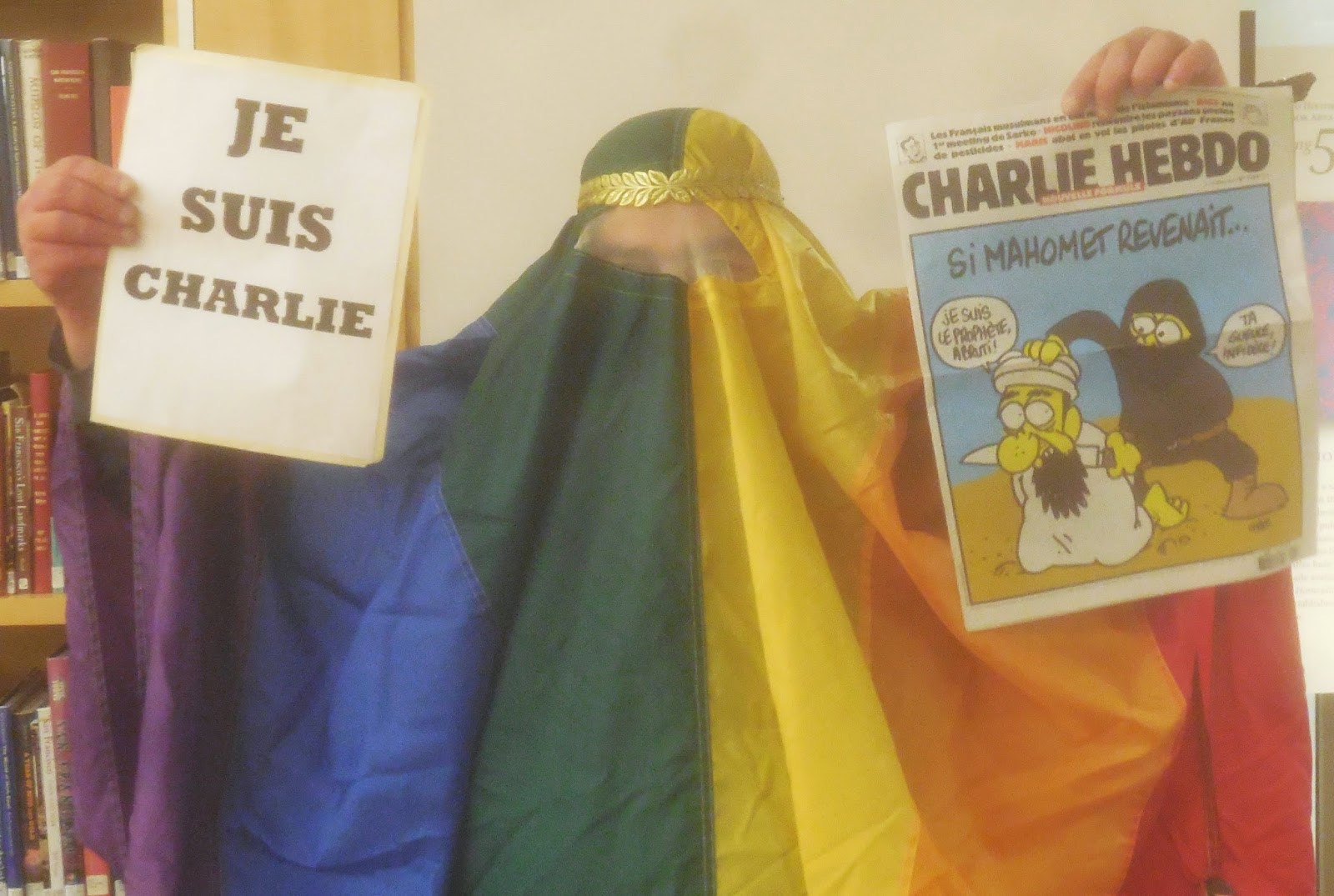 Folks either held signs or pens and Sharpies. I was there for about an hour and explained to anyone who asked that I wore the rainbow burqa as a protest against the oppression of women in Islamic society and in solidarity with LGBT people in the Middle East.
The photos of me holding an edition of a recent edition of Charlie Hebdo were snapped at the main public library, in their special collections section. 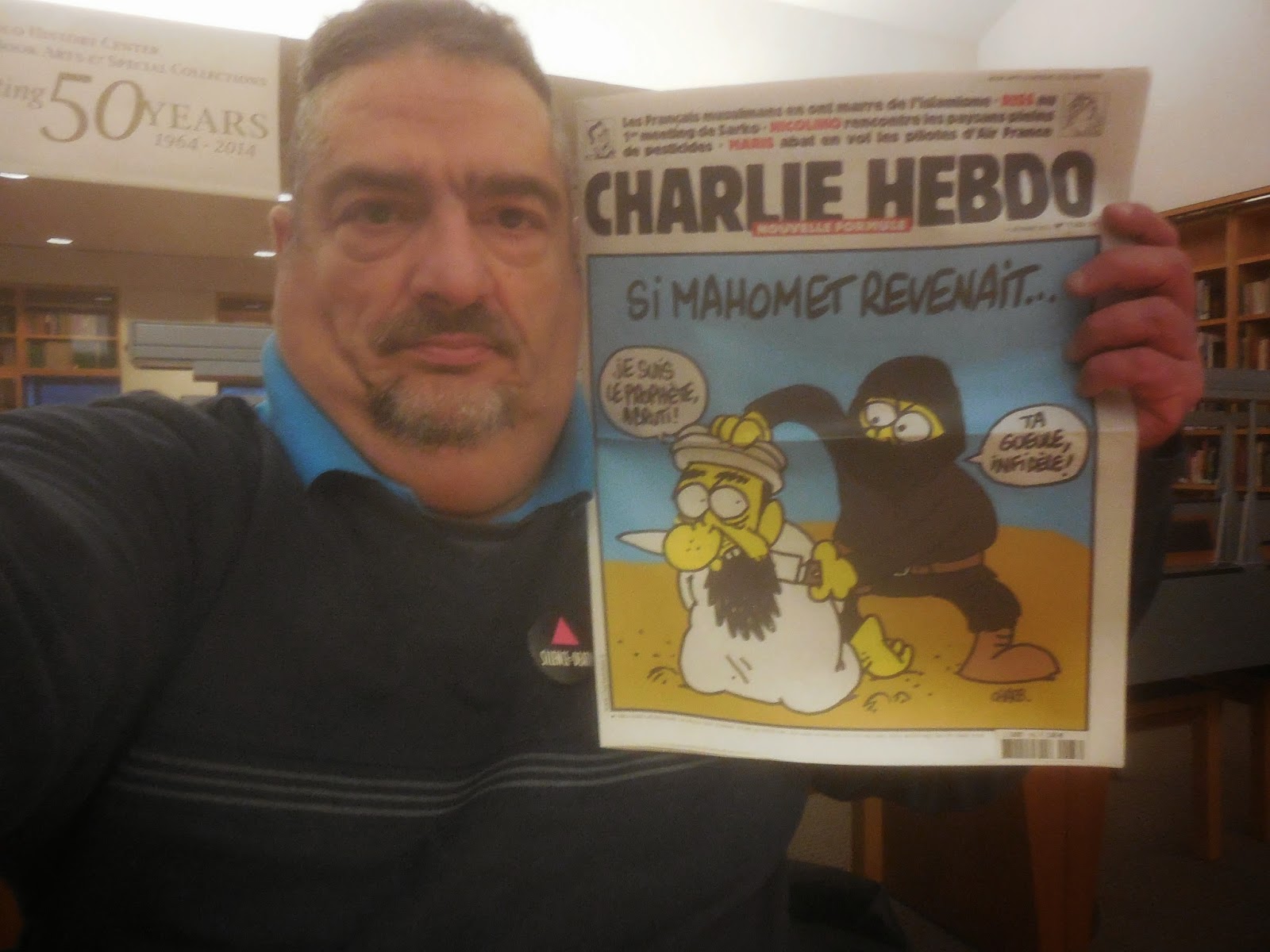 I am proud, as a San Francisco taxpayer, that public funds were spent on a snail-mail subscription of Charlie Hebda's paper edition. It was educational in so many ways to sit and read the past five months' issues. Sure wish I knew French, mon ami, so I could grasp more of the texts but the imagery was often enough quite easy to get.
Were you at any of the vigils around the world in the past 15 or so hours?
Posted by Unknown at 11:09 PM
Email ThisBlogThis!Share to TwitterShare to FacebookShare to Pinterest