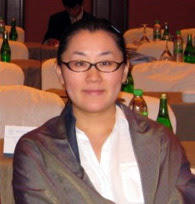 (Azusa Yamashita, co-founder and editor of GayJapanNews who lives in Iwate, Japan. Credit: Fridae.com.)
I have reports from Jamaica and Japan to share, and instead of writing a post for each country, this post contains snippets of news with a number of links back to the sources.

The gay Asian news and social networking site Fridae contacted Japanese lesbian, gay and HIV poz persons, soliciting reports of how the tsunami and earthquake affected them. The comments from the Japanese activists were published on March 18. Here are two:


Though I have not talked to many PLHIV after the earthquake, privacy and medication compliance will be the biggest challenges among them. I am worried about access to treatment.

We usually have some earthquakes in Iwate so I don't usually get scared. But the tremours on 11 March were horrifying. One of the TV programmes told us that they lasted for about five minutes. There are still many aftershocks day and night. My family and I still put clothes and socks on when we go to bed. I've spent my time looking at the survivors' list and listening to a local radio to find out whether my relatives, friends, friends' families and friends' friends are alive.

My experience is still ongoing and I'm afraid I can't still describe them well. I don't watch TV now because it's more than what I can handle to see heartbreaking news in towns where I have relatives and friends and also where I used to live (I used to live Miyako.) Towns I know are completely gone in the coastal areas in Iwate. I don't have words to describe my feelings. I feel as if my feelings are also gone.

- Azusa Yamashita, co-founder and editor of GayJapanNews who lives in Iwate, one of the worst hit areas

From Kingston, where the Jamaica Forum for Lesbians, All-Sexuals and Gays has a glorious new look and fabulous layout for their site, the group issued a declaration to parliament regarding a charter that impacts gays will be debated:


J-FLAG is urging the Jamaican Parliament to make provisions to protect the human rights of all Jamaicans, and provide a framework to reduce discrimination against all persons including lesbians, gays, bisexuals and transgenders (LGBT); persons with disabilities and persons affected by particular health conditions such as HIV in the Charter of Fundamental Rights and Freedoms.

J-FLAG wishes to advise that this Charter should serve as the basis of human rights recognition for all in a society, where its basic laws are based on the concepts of inclusivity and dignity, and on an appreciation of contemporary science on human sexuality, not on prejudice, fear, habit and misinformation.

Lesbian, gay, bisexual and transgender persons continue to be the victims of extortion, physical abuse and harassment by non-state and state actors. In 2010, over 40 incidents of human rights violations were reported to J-FLAG. ...

The biased (and proud of it) Gleaner newspaper carried a story that essentially was the J-FLAG news release. Under the offensive headline "Man before court for killing alleged homo", the paper reported on a gay-related murder case working its way through the courts:

A painter accused of killing a man who made sexual advances towards him was offered $300,000 bail when he appeared in the Corporate Area Resident Magistrate's Court Friday.

Kevon Martin, 33, of Spanish Town Road in Kingston, was arrested and charged last November for the stabbing death of 59-year-old Steve Lindo ...

The accused, who is charged for murder, was offered bail by Senior Magistrate Judith Pusey, despite objection from the prosecution on the grounds that Martin had no permanent address.

But the magistrate, after looking at the statement, said that based on the Crown's case, Martin was acting in self-defence. ...

According to the accused, he was coming from the bathroom when Lindo held onto him saying that he must have sex with him. In the ensuing scuffle, he stabbed the deceased. ...

It is reported that a fight ensued in which Martin used a scissors to stab Lindo several times in his chest, back and neck. ...

Another sad situation in which the alleged killer of a gay man, think of David Kato in Uganda, attempts to justify his bloody and deadly behavior using the gay panic defense. Wouldn't surprise me in the least to learn how many times this bogus defense is successful.

As I read this story, my mind was trying to recall a single instance in which the Jamaica criminal justice system had ever convicted and appropriately sentenced anyone in any of the brutal murders against gays and transgender people. Nothing came to mind. If you know of any such conviction and sentencing, kindly let me know.
Posted by Unknown at 4:13 PM
Email ThisBlogThis!Share to TwitterShare to FacebookShare to Pinterest