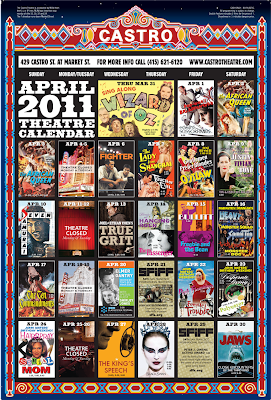 My gay card needed to be renewed so I caught the Sunday evening show of the sing-along version of "The Wizard of Oz" at our historic Castro theater, and had a simply fabulous time warbling along with Judy Garland and the Munchkins. Afterward, I picked up the new calendar and saw that the Castro would be dark for eight-nights in April. Not the healthiest of signs for our cherished movie palace.

For the past year or so on average, the Castro's monthly schedule has included 2-4 weekday nights when the place is shuttered. Seeing that it will be closed every Monday and Tuesday next month makes me nervous because it could signal that patronage is declining. Considering how many dozens of single-screen movie houses San Francisco has lost in the past decade, it's never too early to be concerned we may lost more. There can't be enough attempts to get folks into our remaining single-screen and art house venues.

Look at the eight dark nights at the Castro in April in the larger context.

The Clay theater on Fillmore Street almost went out of business last summer, and its future is uncertain as the landlord and the SF Film Society continue to negotiate an agreement to keep the lights on and films unspooling on the big screen. I was there last weekend to catch the fine new Abbas Kiarostami film "Certified Copy" starring the intriguing Juliette Binoche, and am happy to report about a third of the house was full.

On Haight Street, the small Red Vic is struggling to overcome debt, stay open and maintain their great art house fare of eclectic movies, while serving up organic treats at the stamp-sized candy counter. The Red Vic has started a fundraising drive. To donate, click here. I'll be supporting the theater by purchasing a ticket for the screening tonight of Werner Herzog's "The Enigma of Kasper Hauser."

Here in my Mission district neighborhood, the Roxie is doing well enough these days that they've been printing up a program for their big single-screen space and storefront screening room since August. May our Roxie continue to show films that attract a paying crowd and keep it operating.

My role in supporting these theaters is to attend as many of the movies they show as possible, nudge friends to get their butts into the seats and experience the pleasure of cinema-going with an audience on a big silver screen.

Do your part to keep the Castro, Clay, Red Vic and Roxie theaters open and thriving. Take in a flick at one or more of the theaters real soon.
Posted by Unknown at 4:48 PM
Email ThisBlogThis!Share to TwitterShare to FacebookShare to Pinterest

Thanks, Michael, for pointing this out. The internet has already destroyed a lot of things I like - independent bookstores, mom and pop video stores, the zine scene, and a lot of record stores. There's something special about seeing movies with an audience.

you're most welcome, larry. the best way to support our theaters is to go to them as often as possible and tell friends to do the same. yes,i too enjoy the vibes and enjoyment of watching flicks with a collection of people. as ruth gordon said in 'harold and maude': 'they're my species!' bodies into the seats at SF rep house!