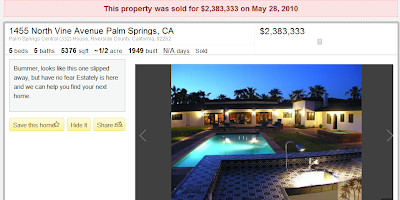 The third most expensive estate sold in 2010 in Palm Springs was a property on N. Vine Avenue, originally designed by industrialist Howard Hughes, which was sold for $2.8 million and was purchased by the James Williamson and Geoff Kors Trust. This storied piece of real estate (above) is where the soon-to-be former executive director of Equality California will spend part of his free time.

(GWMs: Gays With Money. Kors with Williamson. Credit: Paige Green Photography.)
If you've got some bucks to spare and want to see this luxurious estate, you can do so this Saturday. For $100, a single can attend a brunch and stroll about the grounds, and for $250, a couple will receive the VIP package. From EQCA's site:

His last day at EQCA is supposed to be March 31, so they might want to amend and say the former ED will speak at the brunch.

Why is it the only legislative and legal updates ever provided in-person by Kors cost at least three-figures to be in the same room with him? If he held a single free similar update session for the community during his EQCA tenure, I'd like to know about it. Equality from Kors and EQCA flies out the window when grassroots gays want the same exact legislative updates that wealthy gays receive.

Shall we have a look at some of the interior of the Kors/Williamson estate? These photos do not show us the current furnishings and decorations for the power couple. The pix illustrate what several of the rooms looked liked when the property was available as a pricey vacation rental:

(Photo credit: http://www.palmspringsvacations.org/laspalmas_homes.html.)
But the Palm Springs estate is not the only home in California for Kors and Williamson. They also own a home in the San Francisco Marina District. Their home is the one in the center below, with a brownish garage door and front entrance door: 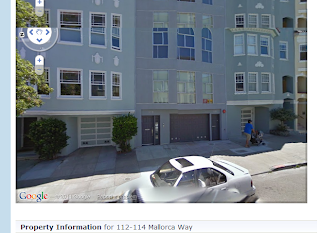 This piece of San Francisco property's most current info on the web is from almost two-years ago, and says the Kors/Williamson trust paid $3.2 million for the home back in August of 2006: 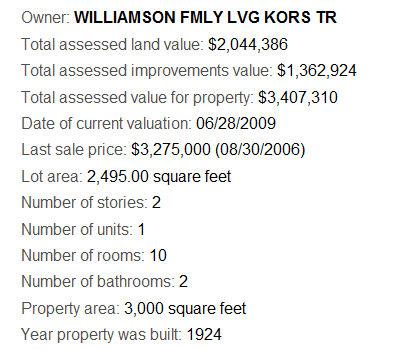 Do you think his wealth and fabulous homes hindered him in anyway from empathizing with gays on the bottom of the economic ladder, or truly understanding the needs of low-income gays? Have you heard Kors or EQCA deplore the harsh cuts Gov. Jerry Brown has made to the social safety net, affecting thousands of non-A-gays who can't afford to attend galas? What about any comments from him and the group demanding higher taxes on the rich?

Frankly, Kors has been great as a rich Democratic Party hack who happens to be gay and at controlling EQCA to carry out an A-gay agenda. Expect more of the same from his replacement.
Posted by Unknown at 1:55 PM
Email ThisBlogThis!Share to TwitterShare to FacebookShare to Pinterest