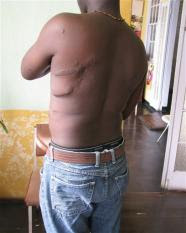 From the AP: "In this June 13, 2009 photo, a gay Jamaican man who identified himself as Sherman shows scars on his back from a near-fatal Oct. 2006 knife attack, inside the offices of J-Flag, a gay-rights activist group, in Kingston, Jamaica. Sherman claims his attackers, calling him Jamaican slang words for gay, targeted him because he is a homosexual, and left him for dead. (AP Photo/David McFadden)"

[Why is the AP using 'homosexual' instead of 'gay' in this otherwise okay caption? -michael]

The Associated Press wire has put out an important story about the myriad problems gay people face in Jamaica. I wish to quibble with the AP writer about the boycott against Jamaica. It is not over. Sure, the boycott is less intense and active as it was during the spring, but it continues.

That aside, I wish the AP had found someone in Jamaica or abroad, gay or straight, with ideas to consider to combat the incredible violence against gays. Important as this wire story is, it is another in a long line of articles about the horrors, with nary a whisper of what to do to change the situation.

We're all aware that JFLAG, the Jamaican Forum for Lesbians All-sexuals and Gays, which isn't even mentioned by name in the article, can't reveal the location of its office out of fear over violent attacks. Jamaican gays are unable to use their real names for this story, and prominent lesbian Jamaican writer Staceyann Chin doubts she would come out now if she still lived there.

But the AP presents no potential solutions to the deadly homophobia racking the island nation. When will solutions be presented and acted upon?

Here are excerpts from the wire story:

KINGSTON, Jamaica — Even now, about three years after a near-fatal gay bashing, Sherman gets jittery at dusk. On bad days, his blood quickens, his eyes dart, and he seeks refuge indoors.

A group of men kicked him and slashed him with knives for being a "batty boy" — a slang term for gay men — after he left a party before dawn in October 2006. They sliced his throat, torso, and back, hissed anti-gay epithets, and left him for dead on a Kingston corner.

"It gets like five, six o'clock, my heart begins to race. I just need to go home, I start to get nervous," said the 36-year-old outside the secret office of Jamaica's sole gay rights group. Like many other gays, Sherman won't give his full name for fear of retribution.

Despite the easygoing image propagated by tourist boards, gays and their advocates agree that Jamaica is by far the most hostile island toward homosexuals in the already conservative Caribbean ...

Hostility toward gays has reached such a level that four months ago, gay advocates in New York City launched a short-lived boycott against Jamaica at the site of the Stonewall Inn, where demonstrations launched the gay-rights movement in 1969. In its 2008 report, the U.S. State Department also notes that gays have faced death and arson threats, and are hesitant to report incidents against them because of fear.

For gays, the reality of this enduring hostility is loneliness and fear, and sometimes even murder ...

Jamaica's most prominent evangelical pastor, Bishop Herro Blair, said he sympathizes with those who face intolerance, but that homosexuals themselves are actually behind most of the attacks reported against them ...

A few weeks later, Prime Minister Bruce Golding described gay advocates as "perhaps the most organized lobby in the world" and vowed to keep Jamaica's "buggery law" — punishable by 10 years — on the books. During a BBC interview last year, Golding vowed to never allow gays in his Cabinet.

The dread of homosexuality is so all-encompassing that many Jamaican men refuse to get digital rectal examinations for prostate cancer, even those whose disease is advanced, said Dr. Trevor Tulloch of St. Andrews Hospital ...

Brooklyn-based writer Staceyann Chin, a lesbian who fled her Caribbean homeland for New York more than a decade ago, stressed that violence in Jamaica is high — there were 1,611 killings last year, about 10 times more than the U.S. rate relative to population — but that it is "extraordinarily" high against gays ...

Chin said she doesn't know if she would have the courage to come out now as a lesbian in Jamaica ...

Prominent Jamaican political activist Yvonne McCalla Sobers noted that social standing still protects gay islanders, especially in Kingston, where a quest for privacy and the fear of crime has driven many to live behind gated walls with key pad entry systems, 24-hour security and closed-circuit television monitoring. People with power and money who are not obviously gay are often protected, she said.

"My thought is there are far more men having sex with men in this country than you would ever think is happening," Sobers said ...

Posted by Unknown at 1:14 PM
Email ThisBlogThis!Share to TwitterShare to FacebookShare to Pinterest

Forgive my ignorance, but what's wrong with the word homosexual?

that word was perfect for stories in the 1950s and 1960s, but it's really more appropriate for clinical or scientific articles, not the general news media.

we same-gender loving men prefer the word gay to describe ourselves.

You mention JFLAG and Staceyann Chin, but neither of them are in favor of a consumer boycott.

I went to Staceyann Chin's reading at Modern Times a couple months ago and asked about the boycott - she said that it would be more productive to do something with constructive engagement like building housing for poor people in Jamaica (sounds like a project for Rainbow World Fund.)

JFLAG has made repeated statements against a consumer boycott, mentioning that Red Stripe has withdrawn support from murder music festivals.

I think it is important that the impetus and leadership for transnational boycotts come from people within countries, as it did in the case of South Africa, which was different in that it was a case of an oppressed majority, whereas this is a case of an oppressed minority which is already a scapegoat, and doesn't need further scapegoating as an instrument of economic harm.

I once did a research project on international sanctions, and they are rarely effective except in cases where a country has very few international trading partners, such as satellite states.