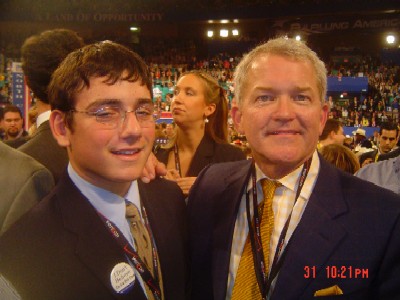 From a GOP Congressional page's blog about the 2004 Republican convention:

INCREDIBLE! There are no words to explain the feeling of being on the Floor the final night of the convention. Not very many 17-year-old seniors get a chance to represent their own Congressman at the conventions close. Congressman Mark Foley had to return to DC to accompany FEMA back to the District to help with the relief efforts for hurricane Frances. Mark's sister Donna took the time to call me and tell me to pick up an envelope they left for me at the front desk with a small surprise. I opened the envelope to find Mark's final evening Floor credentials and a note encouraging me to make him proud. What could anyone say except, THANK YOU!

And here are three notable quotes from Foley in the past few years, that given his resignation and ever-growing scandal about his conduct with young male adults online, may be things he wishes he could retract:

If it were so wrong, why did you engage in such behavior over the years, Mr. Foley?

REP. FOLEY: [...] It doesn't make a difference if the child engaged in sex is real or virtual. In other words, an old simple saying: If it walks like a duck, talks like a duck, it is a duck. The courts obviously didn't have a chance, as Chairman Lamar Smith suggested, to see the kind of virtual reality that is on computer terminals today. It's as close to reality as possible.

FOLEY: [...] Our kids are precious. Their lives are vulnerable. The predators are winning as we speak because there is no mechanism on the books.

You're a special kind of winner yourself, Mr. Foley.
Posted by Unknown at 10:26 PM
Email ThisBlogThis!Share to TwitterShare to FacebookShare to Pinterest

The boy was underage; Foley was one of the members working on legislation to protect children from pedophiles preying on children, Republican members on the committee responsible for the Page program let Foley continue even after being notified in September 2005, the only Democrat on the committee was kept in the dark.
So now does the GOP stand for Grand O‘Party or Grand O‘Pediphiles?

The kid looks a little drunk, himself. Did Foley slip him a mickie?

Why are you putting hte face of a kid who may be a victim of Foley's out there? I realize it's already out there, but why spread it farther. This kid could be in a real bad way right now.