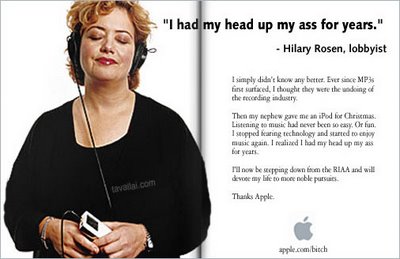 Hilary Rosen, a member of the Human Rights Campaign Foundation board of directors and former head of the Recording Industry Association of America, made two donations to Mark Foley before he resigned from the House.

Do not expect Rosen to ask for a refund.

This is from Lou Chibarro's story today posted on the Washington Blade site:

Gay activist and blogger Michael Petrelis of San Francisco called on HRC to demand that Foley return the $27,000 that HRC has contributed to Foley’s congressional election campaigns between 2000 and 2006.

Please do. And HRC should also consider having all staff, executives and board members disclose any donations they've made to Foley, and then think about asking Foley to return those contributions too.
Posted by Unknown at 1:19 PM
Email ThisBlogThis!Share to TwitterShare to FacebookShare to Pinterest