SF Fire Dept: Homeless Can Now Use Our Toilets to Poop

Here's some good news for homeless people and the general public that is a step in creating a better environment on San Francisco's streets and assisting the homeless with maintaining adequate personal hygiene. My toilet access project was seeded in February and has now borne fruit.

FYI, the toilets I've demanded public access to were all created and are maintained with taxpayer funds.

On behalf of the City, the Department of Public Health, after four months of pushing them and the Mayor's homeless office and director Bevan Dufty (who broke a promise to address lack of public toilets), and the top brass at the SF Fire Department, informed me of some radical changes:

"Thank you for your advocacy to increased toilet access for San Franciscans. We are pleased to update you on the following efforts to increase bathroom availability:

"Fire Station Restrooms: Nearly all of the San Francisco Fire Stations are open for public restroom use. Any member of the public may ring the Fire Station doorbell and will be let in to use the toilet between the hours of 9:00 a.m. and 6:00 p.m.

"Automatic Public Toilet Program: There are 25 self-cleaning public toilets in San Francisco. Here is a list of the locations:

"Pit Stop Program: San Francisco Department of Public Works has expanded their toilet access program from six toilets in three locations in the Tenderloin to include two toilets in the South of Market and to the Mission District where the Pit Stop program has taken over a JCDecaux public toilet.

"Outreach: To ensure that homeless individuals are aware of the bathroom options, flyers will be distributed at homeless shelters, via SFHOT, and at the Project Homeless Connect Every Day Connect office. Thank you again for your advocacy on this issue.

It's terrific that the homeless now have more places to poop and pee and also wash their hands, and on top of that the City is publicizing the expanded options. What needs to happen now is for the fire and health department public information offices, and the Mayor's Office, to issue press releases about the changes.

Here's the list of fire houses, there are over forty of them, where toilets are now available for public use every day: 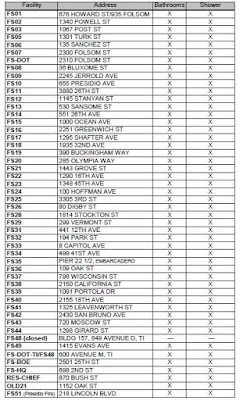