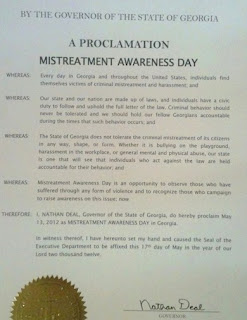 (To insult LGBT people in Georgia, the governor issued this proclamation for IDAHO. Credit: Dyana Bagby.)

I'm having quite a difficult time finding reports about International Day Against Homophobia and Transphobia actions of significance (Gay Inc releases don't count) in the United States, in addition to the Gays Without Borders rally and flag-lowerings in San Francisco.

Thanks to a story by Dyana Bagby in the GA Voice of Atlanta, I learned that one activist pushed Republican Gov. Nathan Dean to take a stand:

There's no doubt Gov. Nathan Deal is far from a friend to LGBT people. He ran one of the most — if not the most — anti-gay campaign in the state's history. His homophobia reared its ugly head again on the International Day Against Homophobia, recognized in Atlanta and around the world on May 17. Atlanta's IDAHO organizer Betty Couvertier last year asked the governor's office for a proclamation recognizing IDAHO. [...] This year, she made sure to meet the deadline and sent in a proclamation request asking Gov. Deal and his office to recognize May 17, 2012, as International Day Against Homophobia in Georgia. [...] But Couvertier likes to push buttons and she persisted and finally she got the proclamation. Except the governor's office changed the name of the day to "Mistreatment Awareness Day." [...]

The proclamation was read aloud at the IDAHO event held in Hapeville's Village Church by Couvertier, with a hint of sarcasm and a few giggles from those in attendance. Essentially, "Mistreatment Awareness Day" states that it's wrong for people to commit "criminal mischief" against others and subject them to harassment in violation of any state law. [...]

[The closest Gov. Dean's weird proclamation comes to addressing homophobia is in this section:] "Whereas the state of Georgia does not tolerate the criminal mistreatment of its citizens in any way shape or form, whether it is bullying on the playground, harassment in the workplace or general mental and physical abuse our state is one that will see that individuals who act against the law are … held accountable for their behavior." 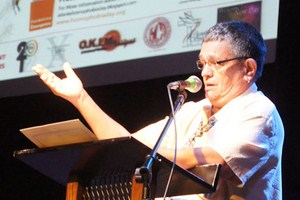 Kudos to pushy lesbian activist Couvertier for organizing IDAHO events in recent years, and for requesting something - anything! - from her state government. I like that in addition organizing a meeting at her church on May 17, she also pressed her elected officials for recognition of the global solidarity day.

In a show of true insult and weirdness, the governor declared May 13 as IDAHO revealing the petty lengths he goes to in order to disrespect gays.

Couvertier and I have traded emails this weekend, and she informed me that respectful proclamations honoring IDAHO were received from the Atlanta City Council and the Georgia House of Representatives.

While I could quibble that Couvertier didn't hit the streets for IDAHO visibility, the important thing here is that pushed a number of government bodies to take a stand on May 17 for global LGBT solidarity, which in turn strengthens the local gay activist community.

Imagine if for IDAHO 2013, gay Americans in all fifty states and the District of Columbia asked their city councils, governors and mayors to issue proclamations for IDAHO. It would a giant step forward for engaging gay Americans in global LGBT issues and express solidarity with our brothers and sisters beyond our borders.

Again, I thank Betty Couvertier for her continuing activism on behalf of IDAHO.
Posted by Unknown at 10:23 AM
Email ThisBlogThis!Share to TwitterShare to FacebookShare to Pinterest