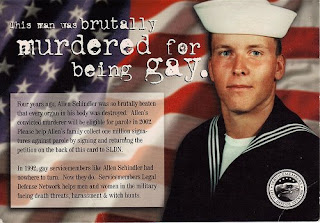 Yet a recent letter in the Stars & Stripes made a number of outrageous claims, including group homo-sex at the snap of a finger:

After reading the latest pro-gay views, including "why not let them out of the closet" and "gays have and will continue to serve honorably" — not to mention "gays are like minorities," they deserve an open chance to serve — I would like to go on record as firmly opposing gay service in the U.S. military . . .

And the backlash? Straight folks, in and around the military taking matters into their own hands to rid the environment of this deviant behavior. It would happen.
Homosexuals in the military. Sure, maybe in 50 or 150 years.

Speaking of straight people taking gays in the military into their own hands to get us out of the forces, let us remember the tragic October 1992 murder of Navy recruit Allen Schindler. He was brutally murdered by another sailor, a straight one, because he came out of the closet and was seeking protection from hostile crewmen on his ship.

As tiresome and bigoted as that letter was, I'm glad it got into print, to remind gays of the mentality among some veterans opposed to open gays in the forces, and because it generated a great reply from a soldier currently serving in Afghanistan:

After reading "Against gays in military" I got a sick feeling in my stomach. The letter writer suggests that if homosexual sailors were allowed to be open with their sexual orientation, it would result in "homosexuals preying on friends, foes and casual acquaintances at sea." To suggest that homosexuals "prey" on others is absolutely ignorant . . .

There are undoubtedly numerous gay soldiers, sailors, Marines and airmen serving our country honorably. I understand the argument that if they were allowed to be open with their sexuality it would deteriorate morale. As leaders at war we are responsible for dealing with an adaptive and aggressive enemy, rugged terrain, extreme weather and rough living conditions. I think most leaders could handle someone coming out of the closet.

Why do we ask these young men and women to violate their integrity by hiding who they really are as they serve their country in the same honorable manner as every other servicemember? Why should we wait "50 or 150 years" to do what’s right?

Thank you, Capt. Waters, for, um, setting things straight for readers of the Stars & Stripes. Your wise attitude of acceptance of the reality of gays in the military is a refreshing antidote to intolerant forces that favor the "don't ask, don't tell" fiasco.
Posted by Unknown at 2:49 PM
Email ThisBlogThis!Share to TwitterShare to FacebookShare to Pinterest