BAR: SF HIV Stats Still Falling;
Stop AIDS Project: HIV = Muscles, Party Time!
My earlier entry today about the CDC readying new HIV stats for release tomorrow was obviously written before I knew the numbers were announced today, and I haven't had a chance to look over the CDC report yet, which I'll read shortly and comment on later.

But as I read all the stories circling the web tonight about the alleged new increases of HIV in the USA, I notice that many of the article contain quotes of anger and outrage from executive directors of AIDS service and prevention organizations, wanting more money, and none of the pieces mention the declining HIV stats in the nation's bellwether AIDS city, except one paper--the Bay Area Reporter's online report.

Today's BAR story reminds readers of what was reported on Thursday on the front-page of the paper:

The number of people newly diagnosed with HIV in San Francisco declined again last year, continuing a trend first noticed in 2003. AIDS cases also showed a decline in 2007 while AIDS deaths appear to be holding steady . . .

Blogger Michael Petrelis, however, questioned why the summary did not highlight the downward trend of HIV cases and faulted the health department for not doing more to publicize the report.

"The annual report is showing continued declines of a terrible epidemic and San Francisco's health department is keeping the news from fags in San Francisco," he said. "It's as if the people who wrote the thing do not want to acknowledge the continuing declines. Why not? Isn't success fewer guys getting infections? Isn't that what we have wanted since 1981?"

If anyone sees mention in any news account on the new CDC stats, either in the gay or straight press, that references either the falling HIV infections in San Francisco or New York City or among blacks in Florida, please share the stories and URLs with me.

I'm intrigued that some of the reporters writing today's stories on the CDC numbers are the same reporters who in 2000, right before the start of the Durban AIDS conference, were using the San Francisco numbers, supposedly showing massive increases of HIV, to say San Francisco's then-current rate of infection was a surrogate marker for rates in other American cities, if not the entire nation.

But this time around, no one except the BAR is reporting the good news from here: HIV continues to decline.

I'll say it again. When the stats here are climbing, then they can be applied to the country, but if San Francisco's infections are steadily falling, well, then the stats only pertain locally.

All that aside, one locally and nationally prominent HIV prevention group, that usually is pushing press releases and heralding alarm when CDC issues new scary stats, the Stop AIDS Project of San Francisco, is uncharacteristically silent today and missing the news.

At the end of June, when the CDC put out another alarming HIV report, this one claiming rising rates among gay man, the lesbian who designs prevention messages for gays, was quoted in the New York Times explaining what it all meant:

Jennifer Hecht, education director at the Stop AIDS Project in San Francisco, said that lack of access to information was a key factor in the increase in infection rates.

“In a lot of ways this is connected to the administration’s policy of emphasizing abstinence-only education,” she said. “And the high rates we see among black men and other minorities indicate that it’s very much connected to larger issues like poverty and racism.”

But the group's site is today totally silent on the latest federal stats. However, a visit to their site will enlighten you to their super-sexy poster above for the monthly HIV pozzie party at an ultra-hot gay nite-spot, and an opportunity to get drunk at a local bar and fight AIDS:

Isn't that stem on the cocktail cherry, in the twisted shape of an AIDS red ribbon, the most adorable thing you've seen this week to persuade young gays that AIDS is still a health problem to worry about? Get back to me with an answer after downing a few Cosmos, okay, girlfriend!

I just don't know if the young muscle stud with the flat abs and "come suck me" look, masculinely topping, ahem, this entry is the best image for scaring gays into safe sex.

Whatever happened to the Stop AIDS Project's "HIV Is No Picnic" campaign posters? Who can forget that frightening effort? When the project was monopolizing bus shelters in the Castro with the "crix belly" ad, gays were told it was the best way to conduct prevention efforts.

Those times are gone and now Stop AIDS Project leaders want gays to equate HIV with built bodies and alcohol consumption involving bubbly pink cocktails. Fine, but the project should acknowledge their radically changed messages, and also tell the gay community why the group is silent about San Francisco's falling stats and what the CDC put out today. 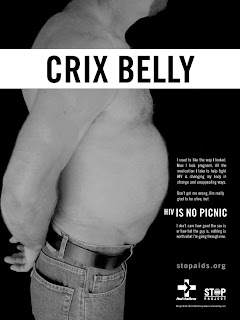 Posted by Unknown at 6:56 PM
Email ThisBlogThis!Share to TwitterShare to FacebookShare to Pinterest

No pleasing you, huh? The Crixbelly ads were a problem, and now the AIDS social ad is a problem, too.

What the fuck would you like them to do? Maybe re-use the shot of the guy in diapers? He had a nice body as I recall - and the outfit was reasonably revealing, too. Will that work?

I'd like a little bit of consistency in messaging from this group, and when they veer off into sexy images to promote their events, images at odds with previous Stop AIDS campaigns, I'm gonna call them on the inconsistency.

Is it asking too much of 'community-based' org to provide promotion of different condoms?

I disagree with the above call for the "active promotion" of sero-sorting. "Neg for Same" is about gay Apartheid, stigma, and elitism, not about the prevention of HIV transmission. Too often in the gay community these days, we see Neg as the "good gay" and Poz as the "bad gay" - when we're all fucking ass and sucking dick, although some would say the Neg gays just do it all a little bit "clean"-er.

The only way sero-sorting should be "actively promoted" is as a Harm Reduction technique in so-called "safer barebacking", which is possibly reducing HIV transmission rates (no formal studies seem to confirm this) but is also risky and unreliable.

We need to fight the stigma of HIV and "programs" such as sero-sorting that promote it. A Neg guy and a Poz guy can have sex all night long -- or for a lifetime in a serodiscordant relationship -- and never transmit HIV with just a few precautions in safer sex that we've known about for decades.

Neg guys need to be educated explicitly about how to have sex with guys safely - neg or poz - and not be left in the dark by vague "prevention" campaigns that teach nothing, such as "HIV Stops with Me", "I Am the Cure", "HIV: Not Fabulous", and similar Bush-Right-Wing-Era slogans. "Don't Shoot Your Load Raw in a Neg Guy, Dude" should be the new slogan in graphic print ads of two men making (as Shakespeare said) "the double-backed beast."