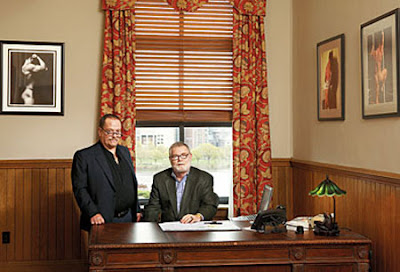 (Larry Basile, standing on the left, with his business partner.)

Obama Takes $250 From Owner of Gay Sex Site Manhunt
The gang over at the Towleroad.com site are reporting today that the conservative co-owner of a very popular gay sex cruising site has donated $2,300 to Sen. John McCain's presidential campaign:

You may have read about Manhunt.net founders Larry Basile and Jonathan Crutchley (above right) in Michael Joseph Gross' OUT article entitled "Has Manhunt Destroyed Gay Culture?"

Crutchley's political leanings are pointed out near the beginning of the piece:

"Crutchley, a liberal Republican with a tight white beard, admits that he felt anxious during Manhunt’s first years, before his and Basile’s initial investment of $800,000 bore fruit. Now, seated at his desk and surrounded by giant photographs of body builders’ glutes, Crutchley says the company brings in at least $2.4 million per month -- almost $30 million a year -- not counting ad revenues, and prospects for growth are strong. Manhunt’s success measures the extent to which online cruising has changed gay urban social life. Is it changing gay politics too?"

Crutchley's right-leaning ways have been reported on before, in the Huffington Post, which reported on a contribution he made to the McCain campaign. Last week, Crutchley defended his contribution in the comments section of an April 2007 interview (which he apparently monitors) with Online Personals Watch.

Out of curiosity, I checked the FEC records for donations made by the liberal co-owner of the Manhunt site, Larry Basile. Turns out he gave $250 to Sen. Barack Obama's campaign back in January. Click here for the Obama campaign's record documenting Basile's donation.

Ain't it grand to know that the owners of a highly trafficked gay cruising site donate to both Democratic and GOP candidates and PACs?
Posted by Unknown at 2:34 PM
Email ThisBlogThis!Share to TwitterShare to FacebookShare to Pinterest

BTW, it ain't just Manhunt... How many of you out there are using a Dell Computer? Well STOP IT -- 100% of Dell's corporate donations (and individual donations from top executives) go to the Republican Party -- a fact I learned from the old "Buy Blue" website.
Keep an eye on the all-new "Buy Blue" site -- http://www.buyblue.org/ -- to keep track of which companies to do business with and which ones to kick to the curb.

From an outfit that according to their own admission is currently taking in $2.4 MILLION per month, close to $30M per year.

The Supreme court is the battle in 2008 - Crutchley had better hope that McCain doesn't win, he'll throw this whole operation under the bus to keep in the good graces of the Donald Wildman types that have made hating gays a big cash industry.