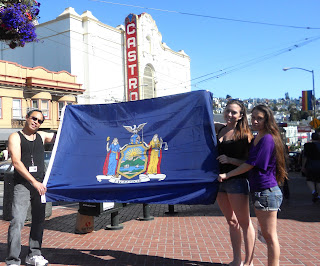 (Gay marriage advocates display the "official" Empire State flag at Harvey Milk Plaza yesterday afternoon. Credit: Petrelis Files.)
After New York state legalized gay marriages, I reached out to my friend openly gay state Senator Tom Duane and his terrific chief of staff Laura Morrison. I asked if they could request the state flag that flew over their capitol when the legislation was enacted. That process would have taken too long and Tom offered to purchase an "official" state flag and ship it to me, and the flag arrived on Friday.

My intention was to request that the Merchants of Upper Market/Castro fly the donated flag from New York at Harvey Milk Plaza starting at noon on Saturday, July 23, after a short speak out and flag raising ceremony. Hoping to generate some good footage to accompany the gay marriages in New York when they start the following day.

As part of my campaign to make the flag pole at Milk Plaza, which is public property, a tool for more of the community, I enlisted longtime gay marriage advocate to speak with MUMC about all of this. What was the outcome and where do things stand today?

Matthew Bajko at the Bay Area Reporter provides the answers in a blog post:

A Castro merchants group has approved a request to fly the New York State flag this weekend in honor of the Empire State’s move to allow same-sex couples to wed.

The Merchants of Upper Market and Castro’s board last week unanimously voted to support adding an official New York State flag below the over-sized Rainbow Flag that currently flies over the heart of San Francisco’s gayborhood.

“With all that has gone on in California the board feels this is something we should do. We want to show solidarity with our brothers and sisters in New York,” said banker Steve Adams, MUMC’s president.

Under the proposal, the East Coast state’s flag would be raised at noon Saturday, July 23 and be taken down the evening of Monday, July 25. Same-sex marriage becomes legal in New York State this Sunday, July 24. ...

Local San Francisco blogger and activist Michael Petrelis is friends with openly gay New York State Senator Tom Duane. He requested a flag from the Democratic Manhattan lawmaker’s office in hopes it could be flown in his hometown.

Due to his fighting with MUMC over its policies on when to lower the Rainbow Flag to honor LGBT people who have died, Petrelis reached out to longtime marriage equality activist Molly McKay to be a go between with MUMC.

It is still unclear if the New York flag can be safely flown underneath the Rainbow Flag. Adams told the Bay Area Reporter Monday (July 18) afternoon that the man who handles the flag pole is still trying to figure that out and wouldn’t have a final answer until Tuesday. ...

I have not heard from MUMC and don't know if they will collaborate with me and use the "official" New York flag that Tom Duane has donated to San Francisco, or if they will allow for a speak out and ceremony before the flag is hoisted up next Saturday.

If MUMC officials are keen to work with activists and make really good use the New York flag from Tom Duane, I'd be happy to work with them.
Posted by Unknown at 3:59 PM
Email ThisBlogThis!Share to TwitterShare to FacebookShare to Pinterest