Every Wednesday morning I head down to UN Plaza for the farmers' market and buy the boyfriend and I a weekly supply of fresh produce. After I did today's shopping, I was riding past the south end of Civic Plaza and noticed a corps of reporters and cameramen, but I couldn't see what they were covering.

Turned out Randy Thomasson, executive director of Save California/Campaign for Children and Families, and a small crew of colleagues, was holding a news conference to denounce the life and times of Harvey Milk. In their view, Milk is no hero.

As I stood a few feet away from him, I listened to Thomasson complain about an effort to declare Milk's birthday a state holiday. He spoke some lies about Milk, gay men in general and Randy Shilts' book "The Mayor of Castro Street," which he had a c copy of and used as a prop.

After snapping a few pictures, I got off my bike and interrupted the press conference. I stood in front of the microphone tree and spoke loudly about the need for gays to challenge the hate, lies and distortions put out to the public by the likes of Thomasson.

The news conference quickly came to an end. Some reporters asked for my name and the reasons why I zapped the event, so we'll see if the interruption gets on TV later today.

Here are some pics of the presser, before it was zapped: 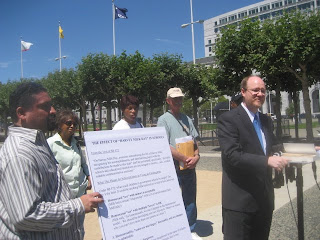 Thomasson at the microphone tree, with a paperback of "The Mayor of Castro Street" 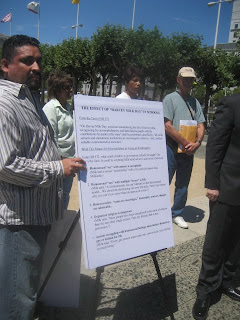 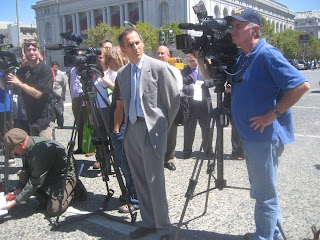 Members of the media taping the event

Thanks to the folks at Tips-Q, I found this release from the haters explaining why they were holding their news conference today:

SAN FRANCISCO, Calif., Aug. 12 /Christian Newswire/ -- Today, as President Barack Obama posthumously awards the Presidential Medal of Freedom to the late homosexual activist Harvey Milk, a leading California pro-family organization will hold a San Francisco news conference to expose the real Harvey Milk as a sex addict "who did dishonorable deeds and does not deserve a medal or a statewide 'day of significance' in California public schools."

Randy Thomasson, president of SaveCalifornia.com, will hold a news conference TODAY -- Wednesday, August 12 -- at 12 noon at the Civic Center Plaza (at Larkin and Fulton streets) in San Francisco.

Thomasson will display posters and provide evidence of Milk's bad character and the negative impact that "Harvey Milk Gay Day" (SB 572) would have upon schoolchildren.

What a stinking load of nonsense!

And be sure to check out this post of mine on the KTVU news story on the zap. Happy to report I wasn't the only gay guy zapping the haters.
Posted by Unknown at 1:49 PM
Email ThisBlogThis!Share to TwitterShare to FacebookShare to Pinterest

I am so glad that you were able to confront the haters and shut down their campaign of lies.

Harvey Milk is on my short list of great Americans (for so many reasons). I think that it is great that Calif. is considering a Harvey Milk Day - it is a pity that such recognition isn't being considered/supported on the national level.

Thank you Michael for standing up for what is right and defending the honor and memory of a man who inspired and whose legacy continues to give hope and inspiration to many people here and abroad.

BRAVO to you [and the earlier guy]! Until news peeps like Randy Shandobil...whom I wrongly assumed would NOT jump at every homohating breaking of wind by psychotic demagogues like Thomasson...refuse to cover such nonsense we should take every opportunity to zap the hell out of them.

It's not about denying "free speech," it's about denouncing this for what it was: "hate speech"...and boo on those cowardly gay org reps who played the polite pattycake game with reporters that has done NOTHING to offset such fascists for forty years! As the song line goes:

"It's not the earth the meek inherit it's the dirt."

At the same time, a raspberry to Obama for transparently exploiting Harvey's legend to continue to try to get us off his back for doing more AGAINST LGBT equality since being sworn in than for.

Way to go Michael! I saw it on the news last night, and was so proud of you to confront the sham newsconference. We can take a lesson from you, and it's time we exposed these lies and distortions for what they are. . .hate. The news crews couldn't pack up and leave quick enough, and neither could Mr. Thomasson. I'm so proud of you!

May their good god bless you, Michael! *giggling* Sorry I just linked in from Towleroad, and I don't normally leave comments but I love reading stories like this. Good for you, Michael, for upstaging Thomasson. Harvey Milk was a great man. He and his family deserve the Presidential Medal of Freedom. Okay I'm Scottish, but one thing I love about America is your grassroots politics of the little man who brings many changes. Harvey Milk loved that idea too, and understood it and how to change it. And he tried and tried and didn't flinch even in his darkest hour to get into City Hall to try and change a system that he thought was out-dated and didn't reflect him as a gay individual - and he was brutally murdered for that. Does a better man deserve such a fate? Democracy in the US is being failed by the far right moron-mantra of the same old, tired book and the same is insidiously seeping its way into the UK but hey, we're gay, and we're YOUR family. "I can be killed with ease, I can be cut right down, but I cannot fall back into my closet. I have grown, I am not by myself, I am too many, I am ALL of us." Harvey Milk, c.1978 Rest in peace.

Michael, THANK YOU for being such an amazing representative for us, for Harvey and for the truth! Really much appreciated. These haters need to go crawl back under the slimy rock they crept out of!