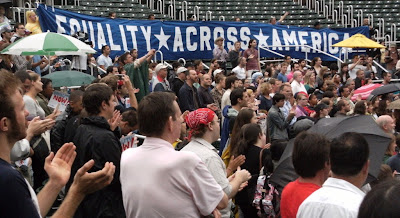 Empty Bleachers:
Cleve's NYC Rally for His DC March
Like many critics of the October 11 march on DC being organized by Cleve Jones and a small crew of activists, I've learned not to depend on the march's site for current info on matters and actions related to.

Here's a perfect example of the problem with the march site. Yesterday, a rally was held at the Public Theater's Delacourt stage in central park, and Cleve was the keynote speaker. You won't find a report on the rally or any pics from it on the site.

Instead, a short report and photos can be found on the Vital Communications site:

I wasn’t sure what to expect when I was invited by a friend to see Broadway Impact’s rally yesterday in Central Park, but I came away very impressed by the group’s ability to appeal to a broad audience and mobilize. Broadway Impact is a coalition of Broadway professionals and their friends that support marriage equality and seek “full equality for all people in all matters governed by civil law,” according to their Facebook invitation. They’re leading a march on Washington on Sunday, October 11.

The rally itself was spirited, informative and, all in all, as audience friendly as possible, given the on-and-off rain. With witty speeches, a substantive Q&A session and a closing performance of Hair’s “Let the Sun Shine In,” I can see how Time Out New York has characterized Impact’s previous efforts as “The nicest protest in town”.

Nothing in that brief report on numbers of folks in attendance, but judging from the two photos posted from yesterday, there were lots of empty bleachers. To be fair, the weather was not cooperating with Cleve, still, I think this off-Broadway tryout doesn't bode well for a successful show on October 11.
Posted by Unknown at 3:04 PM
Email ThisBlogThis!Share to TwitterShare to FacebookShare to Pinterest

I guess the invites must have been sent thru yet another one of those super secret VIP listservs.