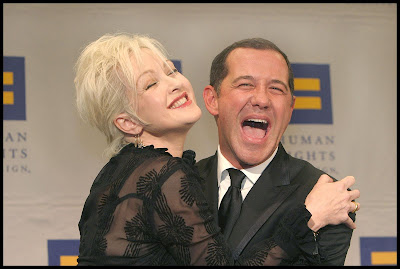 HRC's Solmonese Breaks Quarter-Million Pay Barrier
The latest IRS 990 reports, for 2007, for the Human Rights Campaign, Incorporated, and the HRC Foundation were recently posted on Guidestar.org, and should soon be made available on the HRC site, where earlier filings are posted for public inspection.

Combined revenue for both arms of this Democratic constituency group was nearly $37.5 million, and the master of ceremonies of the show known as HRC, executive director Joseph Solmonese, broke through the quarter million salary mark.

Given the fact I recently learned that Craig Schniderman of Food and Friends, an AIDS charity with a $6.8 million budget, was compensated $334,551, I can't say Solmonese is overpaid. Heck, he may be underpaid, if we use Schniderman's pay level as the measuring tool.

Think this complaint would look good on a t-shirt?

"More than $37 million gay/lesbian/bisexual/transgender dollars flowed into the Beltway coffers of HRC recently and all I got was a lousy sticker with the ubiquitous HRC equal sign logo on it."

I wouldn't have any problems with these salary levels, or how $37 million is flushed down Democratic sewers, if there were dozens of legislative and federal programmatic accomplishments as a result of HRC's bloated operations and chic staffers, and as we all know there aren't. The best one can say about HRC's agenda is that it is a successful producer of ritzy dinners and consumer goods stamped with their equal logo.

Sometimes I think we would we be so much better off if HRC spun itself out of the political business and became an event producer with a line of products marketed to the high income bracket gays and lesbians, and a genuine multipartisan gay advocacy created from scratch.

Without further complaining and daydreaming, here are the top salaries from the 2007 IRS 990 forms for HRC:

Click here to read the list of names and salaries from the 2006 IRS 990 filings by HRC.
Posted by Unknown at 9:49 PM
Email ThisBlogThis!Share to TwitterShare to FacebookShare to Pinterest

There are a lot of people with HIV who are struggling, now that food banks and other vital services across the country are closing. So, congrats on the raise, Joe. Enjoy your wealth. Must be nice to accomplish so little and get paid so much.