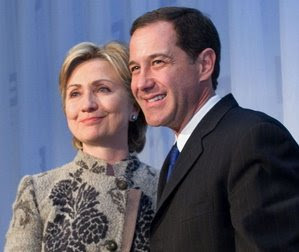 HRC Leaders: $0 for Obama, $4,300 for Clinton
The leaders of the gay division of the Democratic Party, alias the Human Rights Campaign, made contributions to their favorite candidates during the primary race, and as expected by many independent gay pundits, the top recipient of their contributions was the other HRC, Senator Clinton. The presumptive Democratic presidential candidate, Sen. Barack Obama, received nothing from the HRC leaders.

FEC records show which 2008 Democratic contenders were lucky enough to take in dollars from the top people at HRC:

Who at HRC did the giving? Here's the list:

As if it weren't enough for current HRC executives to write checks to Clinton, former executive director Elizabeth Birch's FEC file reveals she gave the maximum allowed by law to the New York senator, $4,600, in 2007.

What else is being said out in the blogosphere regarding HRC? Former Washington Blade publisher Chris Crain, who has long tracked HRC's Democratic tilt and slavish devotion to Clinton, blogged this week on how the gay group, through gritted teeth, declared its endorsement of Obama:

For an important moment like announcing a presidential endorsement, you would think HRC would pull out all the stops -- something we know the resource-rich organization usually revels in doing.

Instead, this is how the Obama nod got announced on HRC's Back Story blog:

The following is from Jason Boeckman, HRC Communications and Marketing Intern. Jason is a senior at Miami University of Ohio in Oxford, OH.

Today the Human Rights Campaign announced its support for Barack Obama in his bid for the presidency.

That's right, the Obama endorsement was communicated by an HRC college intern. The weekly message by HRC chief Joe Solmonese was likewise lukewarm, barely containing his disappointment that candidate HRC wasn't the
nominee . . .

Even still, you would think HRC and Solmonese would get over their "anger and grief" long enough to do their jobs.

Um, Chris, they were doing their jobs -- remaining loyal to Clinton first, to the bitter and depressing end, and putting bold gay advocacy last. Boring HRC business as usual.

wtf is gay money going to hillary? hrc should not be funding politicians.
http://www.queersunited.blogspot.com

Not sure why it should be surprising that people concerned with gay rights weren't Obama backers during the primary, given the McClurkin fiasco. Funny how we're not eager to endorse someone who gives a platform to a preacher who believes being gay is a choice, and the queers are out to "kill our children."

McClurkin was the "ex-gay" version of the Jeremiah Wright swift boat tactic against Obama and his supporters. Sen. Obama denounced both men and made it clear that their beliefs were not his own.

Hey anonymous, ever hear of Rev. Mayberry and Bishop Eddie Long? HRC, the candidate, had her own anti-gay clergy and she even PAID them.

Funny how you were eager to support a candidate who gave a platform to those ideas.

SO true, yet you support the candidate who help pass DOMA and DADT. how smart.

I am NO fan of the useless, money sucking Human Rights Campaign, but it seems to me that the axe to grind here is that nobody gave any money to St. Obama. Boo f-ing hoo! No laws were broken and everyone already knows how self-serving and self-important the "Campaign" truly is.

PS--Here is a hint to the Obama folks, it would be a lot easier for those of us who have major doubts about him to choke down the Kool Aid if you stop accusing us of Democratic heresy and continue trying to malign the also-rans (read: Hillary).

But since when is Michael Petrelis a reasonable barometer of guardian of what is decent and right? God save us. Seriously.

It does seem surprising when you realize that McClurkin has sung for the Clinton's. Bottom line, Hillary took a soft line to Gay rights, especially with DOMA. Obama has been clear on the full repulsion for sometime. I'm an artist that doesn't understand why the HRC would ignore the facts.

This may be hard for you to grasp.

However, some people simply thought that Hillary Clinton was more qualified to be President that Obama. Why is that so fucking hard to get through your and Missy Sullivan's head. You have such a hard on for Obama that it boggles your mind that, while others may like him, THEY JUST PREFERED Hillary.

So now, we are all getting behind Obama and you and Sister Sully can't get off the Clinton's ass.

So your attitude that anyone who doesn't give money to Obama is an idiot or a racist is the very fucking reason that some people are not going to give money.

No one likes to be preached to by a bunch of high and mighty media homo whores. Your hypocrisy is showing honey, put your empty suit back on.

I'm not the biggest fan of HRC myself, but the reason that there is a 0 next to Obama's name is because he doesn't take money from lobbyists. Any check sent to the campaign by these folks would have been refunded.

I work for an environmental NGO in DC and my check for Obama was sent back to me.

(sound of me PUTTING AWAY my checkbook)

Did Edwards also decline donations from lobbyists? If so, how is he on the list? Did he distinguish between registered federal lobbyists and firms with lobbying operations? (Or did he simply lie?)

'Sen. Obama denounced both men and made it clear that their beliefs were not his own.'

No, Obama refused to pull McClurkin from the conference, and gave him a public platform from which he promulgated his odious belief that homosexuality is a choice. It was offensive when the Republicans did it at the 2004 convention, and it was offensive last year when Obama did it.

'SO true, yet you support the candidate who help pass DOMA and DADT. how smart.'

I never claimed to support Clinton. Obama folks might win over a lot more hearts and minds if they stopped putting words into the mouths of people who aren't enthusiastic about their candidate. The flame wars and sarcasm aren't winning over anyone.

So you seem only to be counting staff as leaders. Why didn't you go through the board list? While I have no doubt you'll find a strong majority of Clinton donors, it took me less than 5 minutes of going through the board list and putting in Bruce Bastian's name at opensecrets.org to discover that he gave $2300 to Obama before he gave $2300 to Clinton. How about looking through the whole list? It may vindicate your overall point about the bulk of the giving going to Clinton. But I think looking at the board members, who make the policy decisions at HRC, is better than just looking at a few staff.

These were PERSONAL contributions, not contributions from the organization. I think that is an important distinction to remember. Also important to remember is that most of Obama's money comes from small donations and you can't search FEC records for donations smaller than $250. If you could, I bet you'd find lots of HRC staffers (who don't have rich partners) who have given to Obama. I totally agree though that HRC needs a serious overhaul. Also, can't we be nicer to each other? For the sake of 88 year old Justice Stevens and ailing Justice Ginsburg, a Dem needs to win in November! Unite.

Both Obama and Edwards declined contributions from lobbyists.