Sally Ride Gave $$ to
Only One Presidential Candidate 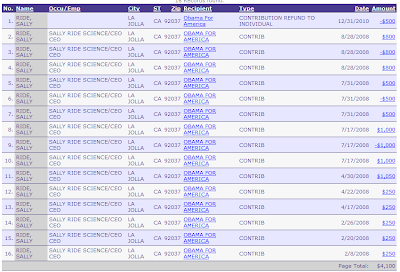 The only lesbian to travel in space, twice, Sally Ride, died earlier this week and I had a gut feeling that she had politics in her bones and was a donor to the historic campaign for president waged by Hillary Rodham Clinton in 2008. My gut instinct was wrong.

Ride's Federal Election Commission file reveals she donated a total of $4,100 during the primaries and general election in 2008 to Barack Obama. Frankly, I had expected Ride to identify and show solidarity with fellow woman pioneer Clinton and toss a few bucks her way in the primary season.

A few weeks before Obama beat John McCain for the Oval Office, Ride penned a column for the Orlando Sentinel in which she laid out her reasons for backing Obama:

Obama also has impressed me with his grasp of the challenges our space program faces and his agenda for where we go from here. Obama clearly understands the importance of human spaceflight and exploration. That is why he supports increasing NASA’s budget to close the gap in American spaceflight capability. However, he also sees the potential for NASA to expand its research capabilities to study things like global warming and aeronautics. And most important to me, he has included plans to integrate our space program into educational curricula around the country so students can experience the thrill of science through remotely controlling cameras on the international space station or, perhaps one day, rovers on the moon.

Rest in peace, Sally Ride.
Posted by Unknown at 1:51 PM
Email ThisBlogThis!Share to TwitterShare to FacebookShare to Pinterest