The twenty-tens decade is still young but it's not too early to declare Bela Tarr's final work "The Turin Horse" a masterpiece and one of the decade's best films. As the apocalypse approaches we witness an elderly father with a lame arm and his stoic daughter tend to their farm and horse who won't eat or drink water, as a relentless windstorm swirls outside.

Life as they know it, is slowly coming to an end. The well eventually goes dry and the lamps won't light in spite of being full of oil. Tarr fans have bemoaned this self-imposed end to his filmmaking career, but really, what else is there for him to say through cinema that he hasn't said? 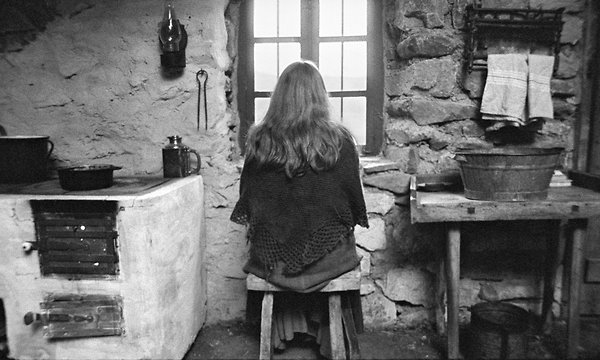 Over six days, the father and daughter eat boiled potatoes, drink alcoholic palinka and endlessly gaze out a window. They hitch the horse to a wagon, to go where we're not told, but the horse won't move. When they load up a cart and head over the farm's hill, the camera remained focused on the hilltop to watch them return home.

Their routines are repeated from various angles, with either the wind howling or an organ plays repetitively playing on the soundtrack. The daughter washes clothes in a basin. the father chops wood with his good hand. Dialogue is kept to brief sentences, except when a neighbor comes by to purchase a bottle of palinka and expound on why the nearby town was blown away.

And it's shown in ravishingly choreographed black-and-white long takes, with no relief in the bleakness. The beauty of this existential tale is hard to deny if you have the patience to stay until the quiet and somber ending. The world comes to a close not with bang or a whimper, but with a relentless and tremendous wind blowing everything away.

I've seen "The Turin Horse" twice and expect to catch it one more time this week. As you can imagine, Tarr films don't come around often and they're best seen on a large theater screen.

"The Turin Horse" is playing with another excellent Tarr film, "The Man From London" starring Tilda Swinton, at San Francisco Roxie Theater tonight and tomorrow. When we look back at the end of this decade and its best films, I predict "The Turin Horse" will be at the top of the list of most serious critics.

Believe it or not, given how dark and heavy it is, "The Turin Horse" was Hungary's Academy Award submission this year in the best foreign language category. The selection committee rejected it as one of the five nominees, surprising no one.

If you're into cinema as an art form free from the traditional narrative structure, with incredible imagery in every scene, you owe it to yourself to see "The Turin Horse". Click here for showtimes and ticket info at the Roxie.

Posted by Unknown at 1:46 PM
Email ThisBlogThis!Share to TwitterShare to FacebookShare to Pinterest