After seeing a mugshot of an arrestee posted by the San Francisco Police Department on their Twitter feed, I tweeted to their spokesman Albie Esparza about what criteria the department used when deciding which mugshots to share online.

The mugshot and SFPD tweet of it are in the comments.

I asked him simple questions. Does the SFPD post all mugshots? Only a select few? Instead of giving me direct answers, Esparza engaged in spin and grandly opined he had answered my questions when all he did was spin and deflect.

See the image below in the comments of our back-and-forth.

So, I filed a public records request for any files about departmental policy regarding mugshots shared on Twitter. Here's the response from Briseida Banuelos of the legal division of the SFPD:

"In response to your request, please be advised that there are no responsive records to your request. The department does not have a written policy, and the decision to release mugshots is discretionary."

IMHO, the police need to develop some standards about whose mugshot gets posted on Twitter and other social media. If they release all mugshots regardless of news value, state that, but if the whims of the public info officers is to post mugshots of arrestees generating media attention or whom department officials don't like for whatever reason, then that needs to be scrutinized. 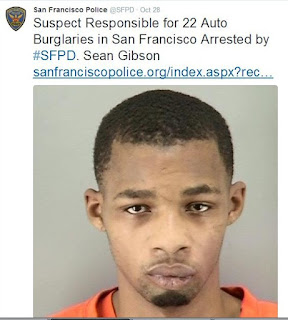 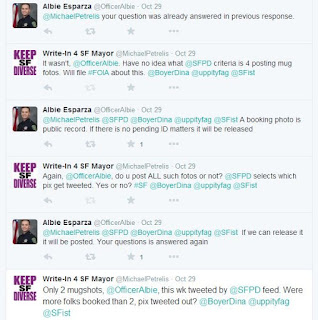