Many thanks to my longtime, dear friend and comrade in the struggle Jay Blotcher for his editorial assistance in creating this package of info. We both advocated for justice on behalf of Allen Schindler and this week, as the nation marks Veterans Day, we're here to bear witness to the U.S. military's complicity in Schindler's demise and honor this fallen gay youth. Read on. 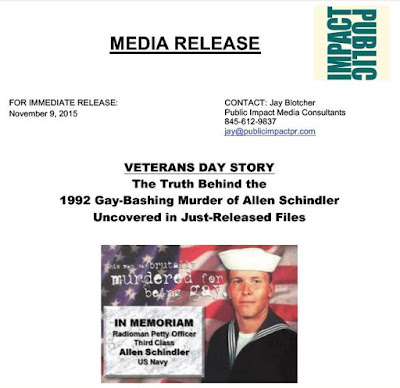 SAN FRANCISCO – The truth behind the 1992 gay-bashing murder of US Navy serviceman Allen Schindler has finally been uncovered.

The 900-page file from the United States Navy has only been made public now, thanks to a Freedom of Information Act request made by veteran gay activist Michael Petrelis of San Francisco. Buried in these pages are eight startling facts previously not made public.

Schindler, a young U.S. sailor, was stationed in Sasebo, Japan. After numerous episodes of harassment and beatings, Schindler sought to get out of the military. However, on October 27, 1992, Schindler was brutally beaten and killed by two fellow sailors. The murder took place in a men's restroom on the grounds of a public park. His head was bashed repeatedly against a urinal so violently that the porcelain broke. Schindler’s own mother, Dorothy Hadjys, was unable to identify the mutilated and disfigured corpse.

The murder took place during a time when President Bill Clinton was reviewing the military’s policy of excluding gay and lesbian people from the military, and the decades of abuse – and killings – inflicted upon suspected homosexuals while serving their country.

The Navy covered up the Schindler killing, granting a sweetheart immunity plea bargain to one of the suspects, Charles Vins, and convicting the other, Terry Helvey. But gay friends of Schindler's demanded that justice be served; they shared information about the miscarriage of justice with the Stars & Stripes newspaper, which wrote the first news story about the murder.

Lawyers for the killer attempted to use a gay-panic defense, with their client erroneously claiming Schindler had tried to entice the suspects into sex inside the restroom. Even though two sailors admitted causing bodily harm on Schindler, only one received an appropriate sentence.

Activist Michael Petrelis, a member of the direct-action organization Queer Nation, traveled twice to Japan to research the case. His travel was sponsored by many LGBT activists. Petrelis lobbied energetically on behalf of justice for Schindler, and to hold the Navy accountable.

“Allen Schindler was destined to become yet another gay man killed and forgotten,” said Michael Petrelis. “Now, 23 years after his death, we finally share the full details of his murder. In doing so, we honor his memory on Veterans Day 2015. People must know the role that governmental homophobia played in his murder and the subsequent cover-up.”

Mr. Petrelis is sharing the Allen Schindler file here with reporters who plan to file a story on the case. He has highlighted eight salient facts about the gay-bashing murder that have never been shared before with the media or public.
https://www.dropbox.com/s/htkw50xgrzt5b2l/r_2015-001627%20Release.pdf?dl=0

Here are the major revelations in the Allen Schindler file, unveiled for the first time:

1. A Sodomy Witch Hunt: During its wide-ranging and comprehensive criminal investigation, the Naval Investigative Service questioned Schindler's acquaintances in the service. However, telling the truth about Schindler made his colleagues vulnerable to persecution under the military’s archaic anti-sodomy laws. (Pages 286 - 297)

2. Constant Anti-Gay Harassment: Allen Schindler's berthing area on his ship, the USS Belleau Wood, was defaced with the words "ball-gazer" – just one part of a constant and escalating campaign of homophobic harassment he faced from fellow sailors. (Page 729)

3. A Diary of Persecution: Allen Schindler meticulously chronicled the anguish and abuse he experienced in a diary he kept in the weeks leading up to his murder. The entire diary, part of the evidence at trial, is now available to the media. (Pages 379-412)

4. Public Humiliation: Radioman Petty Officer Schindler filed for a discharge because of his homosexuality and requesting a closed and private hearing. Instead, sadistically, the ship's captain discussed the matter in front of other shipmates, accelerating the climate of danger that led to Schindler’s brutal killing. (Page 133)

6. Perjury: Terry Helvey, the convicted killer now serving a life sentence at the Ft. Leavenworth Penitentiary, initially made a bogus confession to naval authorities. Later, it was amended in his own hand-writing and presented to the judge, including honest details of the fatal beating and killing of Allen Schindler. (Page 608)

7. Beaten to Death: Accomplice Charles Vins, who served only four-months in the brig in exchange for testimony against Helvey, confessed to kicking and stomping Schindler as he lay dying on the public restroom floor. Vins also admitted guilt to a sodomy charge, but did not name his sexual partner. Because of his sweetheart deal, Vins was protected from the typical punishment for servicemen convicted for sodomy. He was ultimately given an honorable discharge in June, 1993. (Pages 27, 753-761)

9. The Murder Scene: Local Japanese police in Sasebo took extensive photographs of the crime scene within hours of Schindler's brutal death. These graphic images were shared with the Naval investigators, who nonetheless covered up the facts. (Pages 516-562)

ATTENTION MEDIA: Michael Petrelis is available for interviews about his years of investigation into the Allen Schindler murder case. He can also make available three additional files in connection with the Schindler case. Call (415) 621-6267 or email mpetrelis@aol.com.

Posted by Unknown at 11:10 PM
Email ThisBlogThis!Share to TwitterShare to FacebookShare to Pinterest

Why don't you release the name of the officer who ignored his pleas? Shame the person and rightfully so. Force him to take responsibility. Same thing for Vins the accomplish. More justice is needed here.