Queerty's Dan Avery is the only person reporting that the recently stolen Harvey Milk plaque from a cement pillar in the bowl of the Harvey Milk Plaza subway entrance was supposedly robbed from in front of the Human Rights Campaign souvenir shop that also houses a Trevor Project hotline: 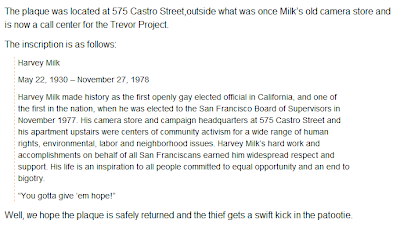 For the facts about the purloined plaque from the Muni station, click here to read the San Francisco Chronicle's story. Queerty does not know what the truth is in this situation. By the way, this Chronicle photo by Liz Ha shows the empty spot at the transit hub, not HRC's store, where the plaque in question once was displayed:

Posted by Unknown at 11:35 AM
Email ThisBlogThis!Share to TwitterShare to FacebookShare to Pinterest