SF: 100 Protest LGBT Iraqi Murders, $5K Raised;
Pelosi Criticized for Silence
Never doubt that a handful of pissed off queens can change the world. Indeed, it is the only thing that has ever moved the queer movement meaningfully forward.

At least one-hundred people came out in today's heatwave over the course of a one-hour rally and participated in San Francisco's first action for IDAHO, International Day Against Homophobia, Sunday afternoon at Harvey Milk Plaza. We rallied against the killings and torture of LGBT Iraqis, and expressed unwavering solidarity with our brothers and sisters in the U.S.-occupied country.

Thanks to the efforts of my organizing colleagues, Gary Virginia of Gays Without Borders and Jeff Cotter of Rainbow World Fund, and several members of the ever-fabulous Sisters of Perpetual Indulgence, over the past week and today's bucket brigade, slightly more than $5,000 was raised. The funds will go to direct-relief aid for the LGBT Iraqi community. Tax-deductible donations can be made at http://rainbowfund.org.

My favorite moment came at the end of the rally. Gary Virginia criticized our very own Rep. Nancy Pelosi, who, he pointed out, is also Speaker of the House, and whose district includes the possibly gayest neighborhood in all of America, was recently in Baghdad and she was silent during her visit about the LGTB murders.

"She's said nothing about the atrocities and that has to change," explained Virginia, to boisterous applause and cheers.

How the hell is it possible our Congressional rep is 100% mute about the murders of homosexuals in Baghdad, is the great unanswered question of the day.

Artist and activist Clinton Fein is editing and preparing a video of today's demonstration, which will be made public tomorrow. Look for it here and on his site Annoy.com.

Let's look at photos from today and see a few of the fine people who showed up. On behalf of the organizers, we thank you. Most photos, except where noted otherwise, were snapped by me. 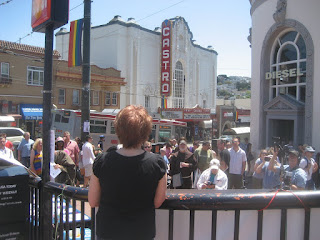 Theresa Sparks speaking to the crowd, about her son in the military who just returned for another tour of duty in Iraq. 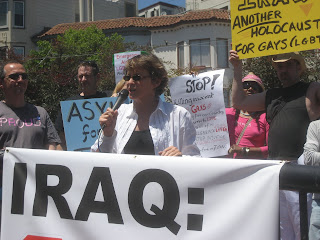 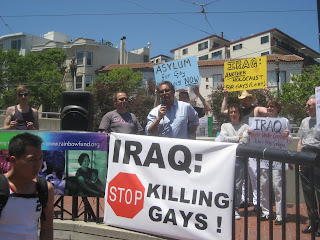 Holding the mic, Iranian-American Supervisor Ross Mirkarimi, who is straight, talked of the necessity to demonstrate, even if the corporate media ignores us.
Under my umbrella hat, I thanked everyone for coming out for IDAHO, and led a short chant: "Gays and lesbians under attack. What do we do? ACT UP! Fight Back!" (Credit: Bill Wilson Photos.) 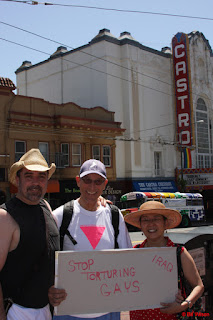 On the left, Jeff Cotter from Rainbow World Fund, I don't know who the man in the middle is, and on the right is Japanese-American humanitarian advocate with RWF, Karen Kai. (Credit: Bill Wilson Photo.) 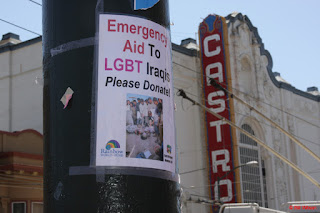 One of our posters on a lamppost. (Credit: Bill Wilson Photo.) 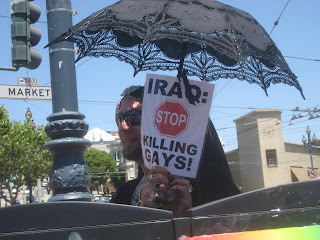 One of the Sisters, in her own shade, sending a message to the universe. 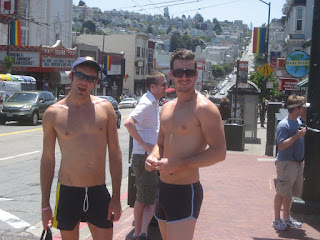 Is this eye candy to you? Not my type at all, but who the hell cares. They were there and gave a few bucks. "Are you wearing sunblock?" I asked them. "Yes," said the one in the hat. "And torture is wrong." Out of the mouths of young hairless hunks oft times come gems.
Posted by Unknown at 8:05 PM
Email ThisBlogThis!Share to TwitterShare to FacebookShare to Pinterest

Maybe Nancy Pelosi didn't bring up the topic because she wasn't briefed on it.