Luke Sissyfag is Now a Bear 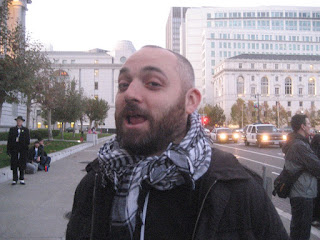 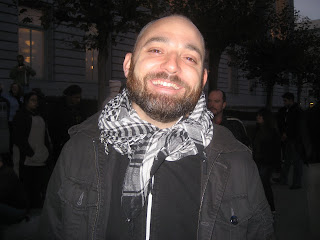 A few months back, I was at a gay rally at City Hall and quickly grew bored because the speakers would stand close to the mic, making it hard to hear their words, so I cruised the crowd from the periphery.

As I walked around, one very adorable young bear turned, looked at me and smiled. He piqued my curiosity, and I thought I must know him from CraigsList or the sex clubs. On first glancing this young man, I could not place him in any political context.

"Michael?" he asked, and the voice registered as none other than flaming, radical femme-y queer activist, some might say terrorist for all the (good and very necessary) grief he caused the gay community and Bill Clinton, the infamous Luke Sissyfag.

It had been way more than a decade since we last saw each other, so we quickly got caught with each other. Luke, who long ago reverted to using his real last name, Montgomery, explained that he now works for an AIDS charity based in Haiti, We Can Build an Orphanage, and that he was in San Francisco for a few months. Click here to view a video about the charity, in which Luke speaks about his work.

There are lots of Google hits for Luke and his notoriety, plus his life after aligning with ACT UP, in addition to a Wiki entry.

Be forewarned though. One of the hits and a Wiki citation for him, regarding his heckling of Bill Clinton on World AIDS Day 1993, link to a video of the president getting heckled about HIV/AIDS.

However, the clip is actually from 1992, during the primary season, when Clinton appeared at a New York City restaurant where a fundraiser for his presidential ambitions.

The person heckling Clinton was the incredibly brave and visionary activist and person with AIDS, the late Bob Rafsky.

Anyway, always nice to catch up with Luke and wish him well with his advocacy on behalf of AIDS orphans in Haiti. 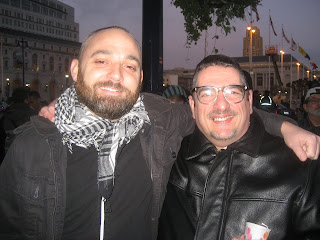 (No more being the same height. I swear back in the 1990s, Luke did not tower over me.)
Posted by Unknown at 4:40 PM
Email ThisBlogThis!Share to TwitterShare to FacebookShare to Pinterest

If the citation is wrong, why didn't you correct the record? That's how the system is supposed to work.

if i had all the time in the world to correct the mistakes out there either about myself or my friends and colleagues from ACT UP, i would make the corrections!

It is great to another survivor from the heady 1992-1993 activist season still doing good work. Luke is much cuter all grown up as a bear. Grin.

There are sill a few of us still doing "good work". I wasinvolved with ACT-UP/Miami in the mid to lat 80s and I work for the State Heath Office in Tallahassee, FL!
Mia R.