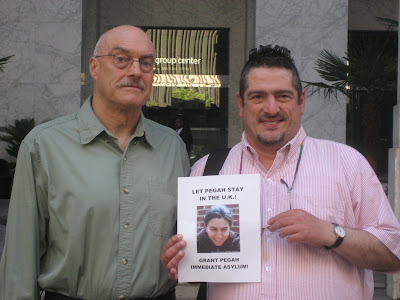 (Hank Wilson, on the left, and yours truly on the right, standing in front of the UK consulate on Sansome Street.)
The deep worry I have over the fate of Pegah Emambakhsh is the reason why I picked up the phone this morning and called Mr. Robin Newmann, an official in the press and public affairs office at the UK consulate here in San Francisco, and request a meeting today with a consular employee to discuss Pegah's case.
Within an hour's time, Ms. Mary Gilbert, the Deputy Consul General, called me and quickly informed me of her limitations in doing anything of substance from San Francisco that might be of benefit to Pegah.
However, Ms. Gilbert did agree to a meeting at her office downtown in the Financial District this afternoon with myself and fellow veteran gay rights advocate Hank Wilson.
She was most gracious explaining her duties as an officer of the Foreign Office, handling cases involving UK nationals, while pointing out that Pegah's situation is being handled by the Home Office back in London. Basically, employees of the two offices do not attempt to influence the other, so Ms. Gilbert really couldn't, and didn't, promise to send a message to the Home Office.
But Hank Wilson still asked Ms. Gilbert to convey to her superiors in the Foreign Office that the American LGBT community wants to see Pegah granted asylum by the UK government and be allowed to remain there, and not subject to the laws of the Islamic Republic of Iran.
With a flat-out statement that a message from her would do not good for Pegah, Ms. Gilbert still said she would write a memo to the Foreign Office back home that she had met with us. I asked that she also include one of our flyers demanding asylum for Pegah with her message to her bosses in the UK, and she agreed to send it along.
Hank and I are pleased the UK consulate and Ms. Gilbert moved so rapidly on our request and met with us. We are optimistic she will keep her promise.
As important, we feel communicating our concerns for Pegah directly to a representative of the UK government may have a beneficial affect on her request for asylum.

We were not allowed to take photos inside the UK consulate, but did snap one of us with a flyer outside the building before our meeting.
We remain in solidarity with Pegah and continue to work to prevent her deportation to Iran.
Posted by Unknown at 4:53 PM
Email ThisBlogThis!Share to TwitterShare to FacebookShare to Pinterest