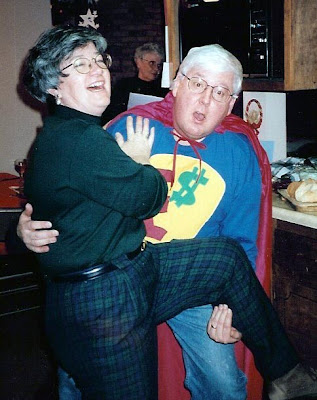 Please allow me the supreme pleasure of introducing you to former state officeholder Don Frankenfeld, a straight GOP politician from South Dakota. He's just come out for gay rights in a big way by joining the board of that state's leading LGBT advocacy organization.

Frankenfeld has written an insightful and honest, not to mention humorous, coming out column for the Hog House Blog, which is based in South Dakota and covers politics from diverse perspectives.

I'd like to welcome this Super Hero costume-wearing man to the ever-expanding community of allies for the LGBT community and look forward to him using his political expertise and personal connections to benefit all citizens of the Mount Rushmore state, regardless of sexual orientation.

Reading over Frankenfeld's words, I hear echoes of what was said back in February by straight GOP Wyoming legislator Dan Zwonitzer, in his speech to colleagues debating a bill about gay marriage.

We LGBT people need to reach out to the Frankenfelds and Zwonitzers, when they publicly declare their support for our equality, and heap praise upon them, if only because we need them to help make America and her dream of freedom for all a reality. And putting them on web-based pedestals wouldn't hurt either.

Here's Frankenfeld's column, with comments from yours truly:

In July I became a founding board member for Equality South Dakota, an organization dedicated to securing and protecting the rights of lesbian, gay, bisexual and transgender South Dakotans. When I explained this to my wife, she wondered if there was something else I wanted to tell her. As it happens, she was already on to me, but for the sake of full disclosure to my new friends in the LGBT community, it is time to come out of the closet: I am a Republican. Also, I am straight – not that there is anything wrong with that.

This is a very disarming opening, one that shows Frankenfeld knows how to use humor to score points, and get his readers to think. I like that he mentions his wife, thereby establishing his heterosexual credentials, with reference to his GOP tendencies, not that I have a problem with that. He should be capturing the attention of fellow heterosexual readers with such admissions.

The fact is homosexuality baffles me, particularly when looking at the most fundamental physical aspect: an attraction to certain body parts and certain sex practices. I can’t understand why some guy would be mesmerized by my equipment, and want to do that with it, when he has the same equipment himself.

Wait a minute. I don’t understand heterosexuality any better. Over the years I have become accustomed to the thought that a guy would naturally be sexually attracted to a woman, particularly certain body parts. (I write from the perspective of a guy, as it is the only perspective I have.) Moreover, a guy might relish the thought of doing that. But why?

Thanks, Don, for being so up front about your bafflement with some aspects of gay sexuality. I have similar feelings, as a gay man, about a few things heterosexuals do in bed. :-)

Whatever your orientation, desire propels you, and is in turn propelled by intrigue, instinct and mystery. Sometimes sexual attraction is irrational, but always, it seems to me, it is trans-rational. So given the mystery of our own sexuality, who are we to judge someone else’s, as long as it is between consenting adults?

Damn, those are important words, words that I hope are read by thousands of South Dakotans.

I don’t expect my participation in Equality South Dakota to change the face of South Dakota, or its politics. I believe I can make a contribution, however. And yes, it is time to make amends, as well. I have had a long journey, with quite a distance yet to go.

I won’t detail my mental cruelty toward gays over the years, except to observe that I was fairly typical of my generation. During junior high and high school, gay-bashing was pretty much the only permissible, respectable manifestation of cruelty toward someone for what they were. I’m not saying that racism didn’t exist, only that anti-black or anti-Indian remarks were at least regarded as politically incorrect, and this somewhat inhibited bad behavior. Homosexuals had no such protection.

I sincerely thought homosexuality was a dangerous perversion, and as a teenager I was mean to those who I thought were “queer.” By college (at an all-male school), I came to know quite a few homosexual faculty members and classmates, and sometimes to put aside (but not eliminate) my squeamishness to form friendships.

When was the last time you read a straight GOP man confess his "cruelty" to gays, and in the larger context of other forms of bigotry, as he's standing up today for fairness and tolerance towards LGBT Americans? I wonder how many straight people will read that passage and totally identify with Frankenfeld. Quite a large number probably.

Early in my career as a state senator, a gay rights activist thanked me for my willingness to meet with him — never mind that our meeting was more or less in secret for our mutual benefit. He was not openly gay, and I wanted to be re-elected.

Later I was a testifying as an economic expert on behalf of a number of claimants to the federal September 11th Victim Compensation Fund, some of whom were gay. I had the extraordinary gift of reading many deeply felt love letters of a flight attendant aboard American Airlines Flight 11 to his registered domestic partner of eleven years. The last of these letters was written on September 9, 2001, around midnight. “The time we are apart seems like years to me. It is a good thing when one’s presence is missed.” Aside from gender, these poetic letters are indistinguishable from those between any passionate and deeply committed lovers. My rare and privileged intimate glimpse into the private lives of this couple was transformational, partly because it was so moving and partly because it was so routine.

Remembering all the victims of 9/11, coupled with my emotions stirred by Frankenfeld's transformation on gays, in part, because of the tragedy of that September day, brought tears to my eyes. It's so uniquely American, no, human actually, when tragic events are turned into something that enlarges our connections to each other, as demonstrated here.

Lately I have been suggesting to my gay friends that they should take a Republican to lunch. That is because Republicans and the gay community need each other. Republicans need to be reminded that they are the party of Lincoln; the party of equality, opportunity and tolerance. And in South Dakota, gays need the understanding and compassion of the Republicans who are likely to control South Dakota government for the foreseeable future, and hence the destiny of gays with respect to many vital issues.

I don’t expect immediate or revolutionary changes. I do expect progress. I think Equality South Dakota can help.

Um, great suggestion about inviting someone from the GOP to lunch, but for a San Francisco resident such as myself, in a city where Republicans are as rare as snowflakes in Sturgis in August, I'll have to wait for a Republican lunch-mate passing through town before I can follow Frankenfeld's advice. Until then, I'll email a word of thanks to him, and share his wonderful column.

Sorry Bro, but Don is hardly in the GOP here in SD anymore. I am not saying that he isn't an insightful, intelligent guy. No way; in fact that is why he has so little in common with the SD GOP anymore. But truth be told, he has little to no pull in the SD GOP. And that is a shame.

And SF is no DC (there are republicans crawling all over the place out here), but there are a few. Even gay ones. GASP! The Bay Area was staunchly Republican until about 25-30 years ago. It's why the hippies moved to Marin -- they thought SF was a lost cause, where the government and police were all controlled by the GOP. And they still remain around. So seek one out. It could change his or her life.