[UPDATE: See note below from a Chron education reporter.]

Since December, I've been keeping tabs on the University of San Francisco's non-action regarding their relationship with and honorary degree they conferred on Bill Cosby in 2012. On July 26, after getting a tip from USF alumni Noah Zimmerman that the school had scrubbed the content of their page about the Cosby degree ceremony, I blogged about the scrubbing after the school's PR director gave me a comment.

To my delight, one of my critics, the blogger behind SF Citizen, Jim Herd, credited me with holding the USF folks accountable and further spanked the school's non-action regarding Cosby and his association with them.

Imagine my surprise seeing San Francisco Chronicle "journalist" and part-time stenographer for Scott Wiener, C.W. Nevius, had as his lead item today the fact that USF's post about giving Cosby the degree has vanished from their site. Nevius writes: "Local residents are asking pointed questions about what USF plans to do about it."

Who might those local residents be? Nevius doesn't say and it's one reason why the word journalist when applied to him must be in quotes. In his column, Nevius fulfills his Wiener steno duties by mentioning him again in the most favorable light. 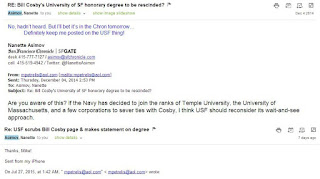 I've traded emails with the Chronicle's education reporter Nanette Asimov and just last week made her aware of the USF scrubbing. She didn't get anything into print and I wonder if she passed along my blogging to Nevius. Sorry, but I don't believe that the scrubbing info fell from the sky into Nevius' lap.

Nevius and how he practices his trade is a prime reason why I believe San Francisco journalism continues to decline ever lower. The Chronicle should learn to properly credit bloggers and other sources.

This came my way from Asimov and I wrote back saying I wouldn't remove her previous emails and her latest was going to be shared. Today's b.s. with Nevius is not the first time the Chronicle has stolen from my blog and all of the paper's reporters and editors should rethink their policy regarding properly crediting sources. That is, if they give a damn about journalistic integrity.
Posted by Unknown at 12:37 PM
Email ThisBlogThis!Share to TwitterShare to FacebookShare to Pinterest