In May 2014, the Clinton Presidential Library of Little Rock informed me it had 22,000-plus pages of responsive public records found potentially related to Chad Griffin who worked in the White House when Bill and Hillary were running the Oval Office. Since then, Griffin's become the president of the Human Rights Campaign and is considered a rising gay Democratic leader. 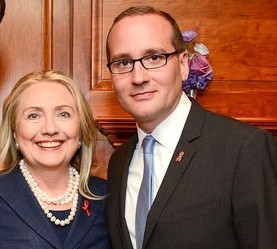 Now, fourteen-months later, I've followed up with the presidential library trying to find out when I might receive documents. Long story short, not any time soon according to Dana Simmons, the supervisory archivist there, who said:

"We process FOIA requests using a first in/first out multi-track queue system. We do have a processing backlog. I can estimate it will take from three to six months before your FOIA request is available for research. FOIA requests received by the Clinton Library are processed and reviewed for access under provisions of the FOIA and are subject to 44 U.S.C. §§2201-2207, which require that we notify the representatives of the former President and the incumbent President prior to the release of any Presidential records. Once processing and notification is complete we will contact you. We appreciate your continued patience."

First, I wouldn't put it past Bill and Hillary to keep the number of archivists and FOIA processors low, extending the lag-time for release of emails and other files, at the library.

Second, I was unaware that the former and current present presidents' reps need to review potential releasable public records to me, further lengthening how long it will take to maybe eventually receive records from or about Griffin.

Third and final point. Anyone care to wager we won't see any of Griffin's White House emails and other files on him till after the 2016 election?

All this is a reminder I share with anyone who asks my advice about filing a FOIA. Don't delay and file today because it's rare to have a quick release of responsive public records from the federal government.
Posted by Unknown at 11:16 AM
Email ThisBlogThis!Share to TwitterShare to FacebookShare to Pinterest