As the San Francisco Chronicle continues to lose readers, I wish to remind its editors and reporters that my husband and I are among their dwindling number of folks who buy the publication and read it on newsprint.

A few days ago, I took Chronicle "journalist" C.W. Nevius to task for stealing from my blog, info about the University of San Francisco and Bill Cosby's honorary degree and how the school scrubbed their site, facts I reported last week.

This week, over at the SF Examiner, crime and politics reporter Jonah Owen Lamb broke the story about lawyers for Raymond "Shrimp Boy" Chow revealing corruption on the part of Mayor Ed Lee and a federal case implicating Assemblyman David Chiu and Supervisor London Breed. 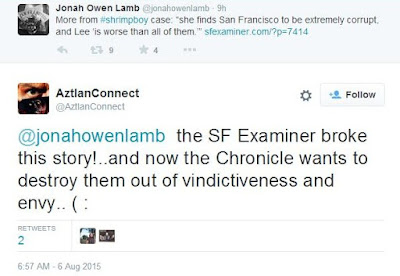 Of course, the Chronicle omitted mention of their competitor scooping them and on Twitter, @AztlanConnect pointed out who was first to report the Shrimp Boy and Ed Lee news. Nice to see others holding the Hearst-owned paper to some standards. 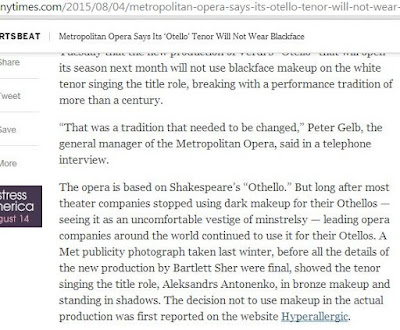 Yesterday, August 6th, Michael Cooper of the New York Times wrote about the Met Opera ending the practice of white male singing donning blackface when performing the title role in "Otello". Cooper wrote: "The decision not to use makeup in the actual production was first reported on the website Hyperallergic."

Imagine that. A legacy media outlet giving proper due to an online news source. There is a very important journalistic lesson here for the SF Chronicle, but will they learn from their counterparts at the Times?
Posted by Unknown at 4:09 PM
Email ThisBlogThis!Share to TwitterShare to FacebookShare to Pinterest