Listen up, all you devil dogs suffering from post-traumatic stress disorder who served with the Marines and are preparing to march on a weekend, shirtless and wearing only silkies, strong sunblock, hats and boots. As a queer dude of a certain age who lived through the AIDS plague and lost loved ones to AIDS-related PTSD and learned a few lesson in the social change group ACT UP, I've got a constructive suggestions for you.

While my queer eye soaks up images of beefy Marine veterans who hiked around San Diego and Houston recently focusing a light on the average of 22 veteran suicides daily, and I look forward to more pics of hunks crossing my monitor, you should do more to send messages when you march. My suggestions: 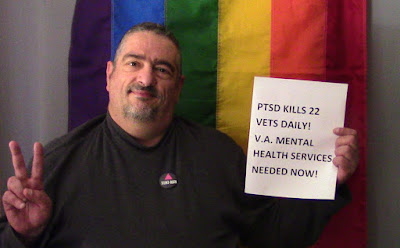 1. Create better imagery. I wanna see you holding signs and using social and legacy media to get your demands out there. This photo of me follows a rule I was taught as a gay activist. Create imagery that doesn't need a caption. Here I hold a sign reading "PTSD Kills 22 vet daily! V.A. mental health services needed now!" Get my point?

2. Gimme images of former Marines hitting the streets with posters stating the names of comrades lost to suicide or promoting online community-building via the hashtag #IrreverentWarriors. Include pics of deceased buddies and family members.

3. The armed forces now include queers except transgender soldiers, which should soon change. It would send a powerfully inclusive message displaying a rainbow flag at your next "22, with 22, for the 22" marches. Even if there are no openly gay veterans marching, you can still carry the LGBT Pride Flag in solidarity.

3. Stage actions at Veterans Administration health care and administrative facilities. They're everywhere. You would feed two birds with one seed. Taking your shirts off and carrying posters regarding PTSD health ramifications equals activism and mental health, while generating images with clear messages to VA executives to fully meet all of your needs.

4. Veterans's Day is just over three-months away. Marches on the VA headquarters in Washington, DC, and all VA facilities across America could transform into a force the government cannot ignore. How about "11/11/15 = 22/22/22" as your rallying cry to action in November?

5. Finally, keep up the activism and having rowdy gatherings and building community and sharing all the woofy photos, and get in touch with me when you're in San Francisco for a good time!

Now, a few of my fave dudes and photos from the Houston action. 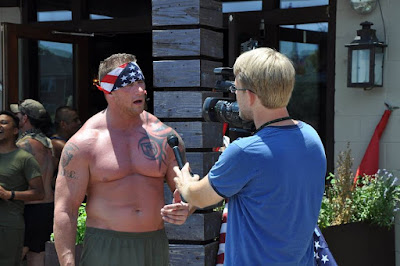 Appealing to my queer eye but damn, I wish the dude held a poster reading,
"Vet with PTSD? Join #IrreverentWarriors!" 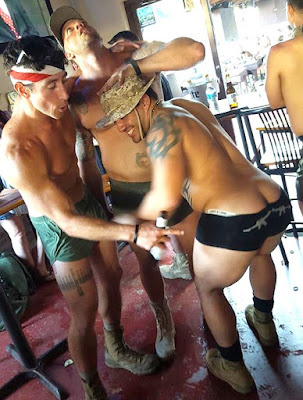 I gotta hang out at this bar. What's the address? 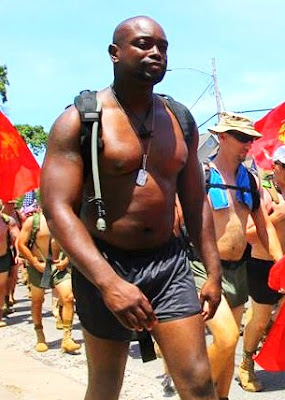 A black Marine vet hitting the streets and wearing his dog-tags. 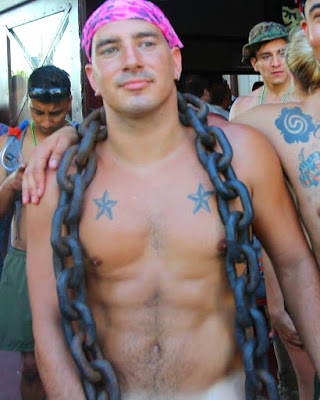 This Marine sure likes using a metal chain as a prop. 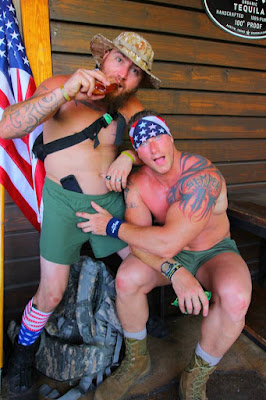 I don't know if they're straight or gay, but the dudes sure are acting queer! 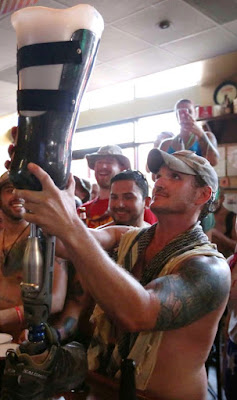 Been maimed and lost a limb in warfare? Forget the keg of brew. Sip from the leg of beer. 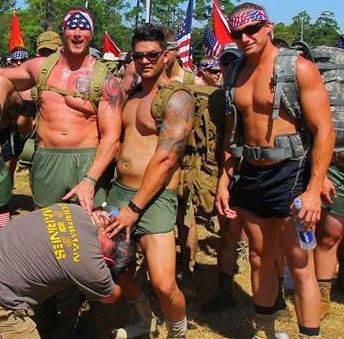 How do I sign up to be the guy to inspect the inner thighs of marchers? 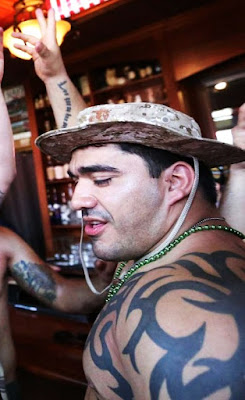 Sure, I'm a vegan but occasionally I like a slab of beef. 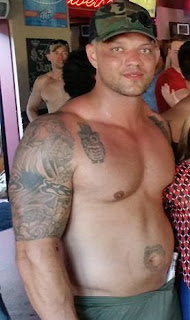 Bedroom eyes, beefy and inked around the belly-button. Yeah!
Posted by Unknown at 6:39 PM
Email ThisBlogThis!Share to TwitterShare to FacebookShare to Pinterest