Let's follow the political money today in San Francisco and at the California state level.

The San Francisco Ethics Commission's search engine lists a single donation from Republican presidential candidate Donald Trump. He gave $500 to Willie Brown in 1999 for his mayoral reelection campaign and Brown is now a columnist at the SF Chronicle and lobbyist for various businesses. 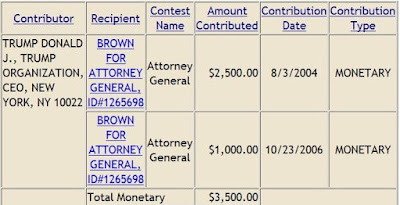 From the Secretary of State's web site, we learn that Trump donated $3,500 from 2004-2006 to Jerry Brown's campaign for attorney general, but hasn't given money for his runs for governor. 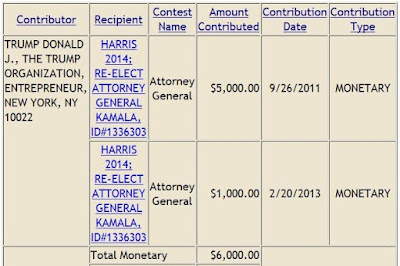 Also receiving Trump dollars was Kamala Harris in her efforts for the attorney general's office. She accepted $6,000 from Trump from 2011 to 2013.

And Trump gave Gavin Newsom $2,500 in 2009 for his aborted race for governor and to his credit, Newsom gave that amount to an immigrant rights organizations and denounced Trump's racist rants.

I've not found anything on the web about either Brown or Harris washing their hands clean of Trump money and you know otherwise, please lemme know and I'll amend this post.
Posted by Unknown at 1:32 PM
Email ThisBlogThis!Share to TwitterShare to FacebookShare to Pinterest