My previous posts in this series referred to men on the street, but that's inappropriate for these guys - all of whom had their photos taken while they were at work indoors. Told them they would appear on my blog, finding a taste of fame on the web. Many thanks to the guys for standing still so I could capture them on disc. 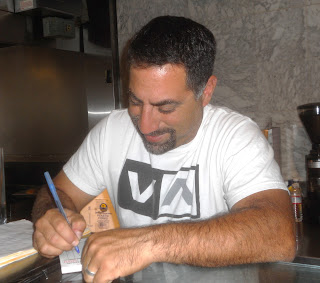 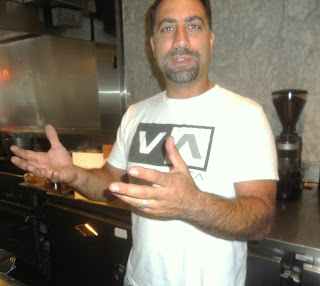 The last time I saw George, owner of the Mykonos restaurant on Polk Street, he had more meat on his bones and he carried the extra pounds very nicely. He told me with the help of his wife and her mother, he's shed forty pounds. In the top photo, he's writing down the URL for my blog and he spelled my last name correctly without me dictating it to him. That doesn't happen often. Stop by Mykonos and sample the best spanakopita in town. 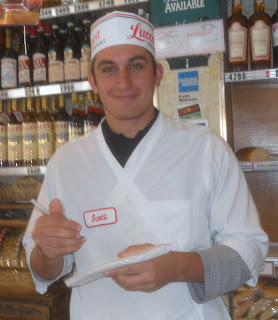 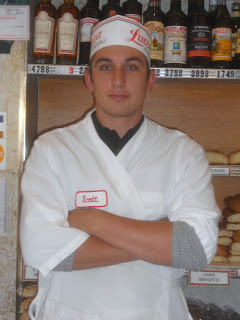 Young Scott works at Lucca's Ravioli Store on Valencia Street and the entire gang at this Italian deli are good men, providing service with a smile. Everyone knows when you want old world fresh Italian meats, assorted cheeses and delicious pastas, Lucca's is where you shop. I'm thinking of asking for one of their hats to wear at the Folsom Street Fair in September. 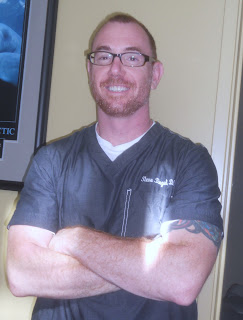 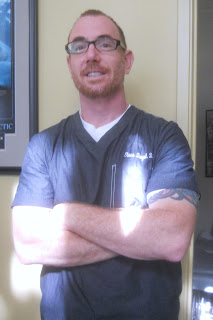 Steven Biegel posing for my camera at his office on Valencia Street near McCoppin with brighter than expected shafts of sunlight hitting his body. I met his attractive wife and adorable two girls recently downtown, and chatted about all of us adults hailing from New Jersey. He's my chiropractor with the gentle touch that snaps my spine with ease. Next appointment, I have to get photos of him without the sunbeams.

What a great series. The handsomeness of your subjects, your artistic poses of them, and, my favorite part, the witty captions and snippets of bio details combine in a wholly Petrelisian way as a celebration of San Francisco's verve and humanity. This should be made into an art gallery exhibit.