What is the point of the billboard currently up at the busy Market and 16th Street intersection, located atop the building where the Bagdad Cafe once operated in the Castro neighborhood?

A vodka company, which may be the official vodka of the Gay and Lesbian Alliance Against Defamation for all I know, is pushing its product and using GLAAD's name and rainbow imagery to capture the gay eye. For what purpose?

Corporate sponsorship of any nonprofit always has to have a greater benefit to the company than the organization partnering with them, otherwise they're not going to spend thousands, perhaps millions, of dollars promoting their product's association with the charity.

Rampant and avaricious pursuit of corporate backing for the organization that puts on our LGBT annual celebration in June, SF Pride, has directly contributed to the institutional and financial meltdowns at the organization in the past year. As the shit hit the fan with SF Pride resignations and city audits, few activists rushed to help the group recover.

And while SF Pride corporatized the parade and party marking the Stonewall Riots to the max, they left behind a grassroots political agenda and lots of pissed off queers who lost ownership of the pride celebration long ago.

So much of the American gay movement and its core political soul and agenda has been sliced and diced, packaged oh-so-neatly to marketers, tethered to the Democratic Party that gives us crumbs, sold off in countless business sponsorships and naming rights, and generally disempowered and disillusioned a wide swath of ordinary gays.

GLAAD is one more component of Gay Inc that could, and should, go out of business business tomorrow and the larger community would not suffer. Here's a pic of their billboard collaboration with Rokk vodka. Visual pollution: 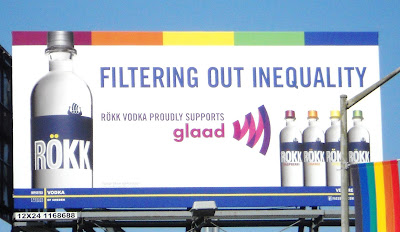 Posted by Unknown at 9:39 PM
Email ThisBlogThis!Share to TwitterShare to FacebookShare to Pinterest

Well, I'm neither a fan of GLAAD nor billboards, but.... Lots of people used to bitch about companies not advertising to us or supporting our organizations; now that it's happening, maybe we ought to take some responsibility for the result.