May 17 is the annual International Day Against Homophobia and Transphobia, and this year's edition marked the seventh occasion for the day.

In San Francisco longtime activist and person living with AIDS Gary Virginia hosted a fabulous solidarity social at Cafe Flore in the Castro neighborhood, and on behalf of Gays Without Borders he and I organized everyone in the place into posing for a group photo.

Approximately forty people were sitting at tables, using laptops or tapping handhelds, maybe eating soup or sipping cappuccino, and everyone's spirits were up and grooving on this impromptu act of global political organizing.

We displayed pink balloons and printed materials about IDAHO and actions in other cities today, and posters featuring lesbian couples with their children from the Coming Out group in St. Petersburg, Russia, were taped to the DJ booth. You can see one of the posters, held up by the seated male couple in the photo.

As we assembled ourselves for our photo-op in solidarity with every other IDAHO event happening around the globe today, Gary thrust his mic in the face of everyone getting ready for the picture-taking, asking them to state where they were from.

Two lesbians were visiting from Norway, one man said his home was Peru, a few guys hailed from San Diego and another pair of lesbians announced they lived in Texas, oh, and few San Franciscans too.

I had a ton of fun standing with the other fourteen folks in the photo, talking to those who stayed at their tables but cheered us on, and doing my part today for global gay solidarity. And how was your IDAHO for 2011? Hope it was as terrific as the social in San Francisco. 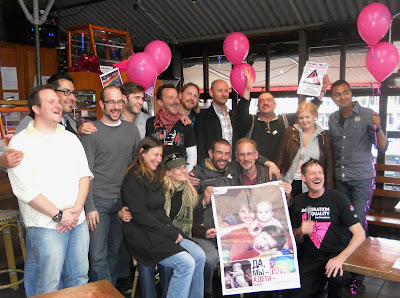 (Photo credit: Gays Without Borders/San Francisco.)
Posted by Unknown at 10:58 PM
Email ThisBlogThis!Share to TwitterShare to FacebookShare to Pinterest