Cement Trash Receptacles Tipped
And to think I saw it on Market Street today, in the heatwave making the Bay Area quite toasty and forcing everyone to go slower than normal. A living chicken being kept as a pet by a homeless woman, as they stood in the front, and the shade, of the Public Utilities Commission opposite United Nations Plaza. 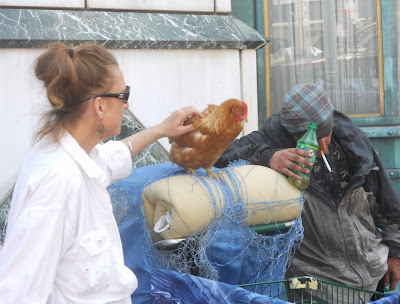 The chicken amused me, in part, because just two-days ago the city ended the sale of live chickens in the early hours of every Wednesday, when vendors for the weekly farmers' market are just setting up their stalls for the gay, according to the SF Appeal. Pressure behind this development came from the LGBT Compassion group of vegans and animal-lovers, who picketed the stall and sued the vendor in court.


Sort of an only-in-San-Francisco tale, right?
And what exactly is up, pardon my mixed metaphor, with the series of downed cement trash holders in a five-block area of Market? As a bike rider, it was impossible to miss the tipped-over containers since a few of them were in the bike lane.
The containers are so heavy, I'm sure it took at least 4-5 very strong persons to knock them into the gutter, and the crew apparently had enough muscle to repeat their tipping performance four times. 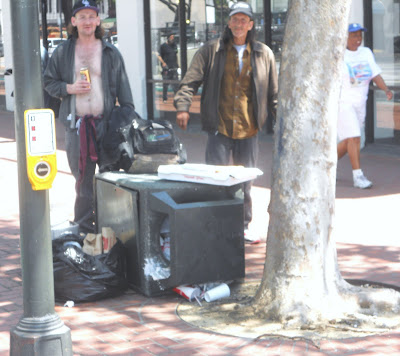 These homeless men made nasty homophobic remarks and said I had no right to take their picture as they were eating some lunch, situated at the corner of Market and 12th Streets and the Honda dealership. Creative use of a receptacle as a table top for a pizza and beer meal. 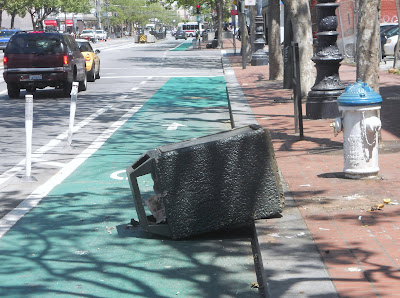 In front of the plumbers' union building at the intersection of Market and Franklin Streets, is where you'll find this container. I admit, I looked around for a few of those beefy, young but seasoned on the rough 'n tough side apprentice and master plumbers who can be found around 4:30 PM daily getting job slips, because I would have asked them to use their muscled-bodies to get the container back on the sidewalk. A good reason to talk with hunky blue collar dudes! ;-) 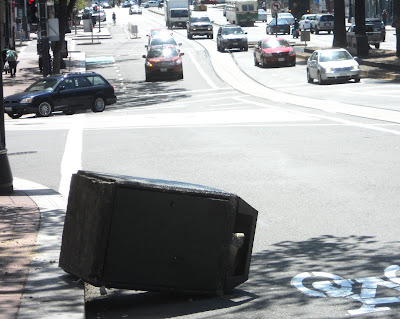 This receptacle can be found where Valencia meets Market, and seemed to have big cracks on the top and one side from the fall onto the street pavement. 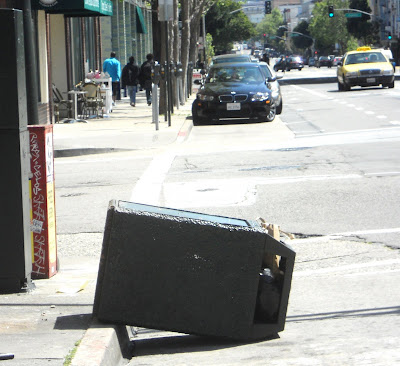 At the corner of Valencia and McCoppin Streets is where this lies in the gutter, waiting for probably the Department of Public Works to come along and clean up the mess, make the container upright again.
And what did you see on Market Street today?
Posted by Unknown at 5:24 PM
Email ThisBlogThis!Share to TwitterShare to FacebookShare to Pinterest