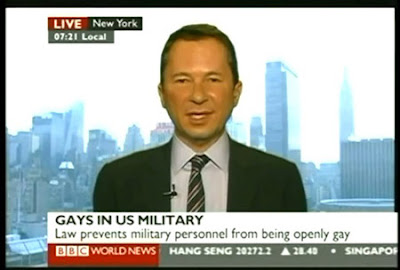 (Richard Socarides making a TV appearance to bash President Obama.)
President Clinton's former point-man to the gay community, Richard Socarides, seems to never miss a chance to criticize President Obama's less-than-fierce advocacy on issues of importance to us, and his opinion piece in today's Wall Street Journal contained many valid complaints against the current administration.

However, Socarides' current bash-Obama crusade is markedly different than his strong work during the Clinton administration and for the Clinton/Gore team's reelection, when he traveled to key cities with large gay populations, to dampen the justifiable anger boiling in the community over the Defense of Marriage Act becoming law, and the Employment Non-Discrimination Act failure.

What sort of reception did he receive in San Francisco? A Bay Area Reporter editorial by the late Mike Salinas, summed up his visit to the paper:

This office was only one of the places where Socarides spent numerous hours around the Bay Area, trying to persuade people to buy more Bill Clinton, although he couldn't come up with very compelling reasons to do so.

His arguments were mostly that Dole, Perot, and Nader were worse than his boss, but that hardly makes the choice appealing. We are well aware that the decision facing gay and lesbian voters this November is, metaphorically speaking, the choice between eating shit and eating poison ­ but it was almost heartbreaking to discover the job of the liaison is only to hold the shitty ladle to our lips.

Throughout the meeting, Socarides was eager to get a BAR tee-shirt, but less inclined to talk about gays being rejected for military uniforms; eager to talk about how Clinton held the line for NAFTA, but not so much about the failed ENDA, which naturally is of much greater impact to our community; and mostly just anxious (in every sense of the word) to learn whether the Clinton White House could count on us after so many broken promises to keep the moving van away from the front door.

That editorial, entitled "Fair and foul," ran on October 3, 1996, and is not online. It was keyed in for me by BAR editor Cynthia Laird. (Thanks!)

But if you want to read something online about that disastrous tour for Socarides, check out this excerpt from the SF Weekly's report:

Bill Clinton's lesbian and gay liaison, Richard Socarides, quietly made the rounds in S.F. last week, unsuccessfully trying to tamp down gay anger over his boss' signing of the Defense of Marriage Act, and generally taking the community's temperature.

Or, as Supervisor Leal told her fellow queer supe Tom Ammiano, who couldn't make the meeting with Socarides Sept. 26, "He sure kissed a lot of ass." The meetings -- with gay journalists and elected officials -- were coordinated direct from Clinton/Gore campaign headquarters. So, harbor no doubt about their import.

Bob Ross, publisher of the Bay Area Reporter, said he raked Socarides over the coals for 45 minutes. "He didn't really have any answers for us," Ross says.

If you're still hungry for additional info about Socarides' fierce advocacy - for Clinton back in 1996 - read some of what the Advocate had to say:

Activists also complained that Socarides turned down a chance to link America Online's gay and lesbian area directly to the White House. [...]

And Socarides said he views the trip as a complete success. "The reception I received was extremely warm," he said. "I accomplished what I set out to do."

Liar, liar, pants on fire! He was the only person who thought those things about his visit here. Where did his loyalties lie? Not with the wider gay community; but with the Clintonistas.

And now many gay bloggers and corporate media outlets, without having secured any extended and clear explanation from Socarides about his role in the hostile homo-fearing policies and non-advancement of gay agenda items under Bill Clinton, put him on a pedestal as an independent critic of Barack Obama.

We gays are owed an honestly accounting of what exactly Socarides did from 1993 to 1999, to stop his boss from giving America DOMA and Don't Ask, Don't Tell.

Posted by Unknown at 5:30 PM
Email ThisBlogThis!Share to TwitterShare to FacebookShare to Pinterest

Personally I am kind of conflicted on the time travel of blaming Clinton so harshly on DADT. It was along tome ago. Adn as I remember at that time in 1993 the Dems who controlled Congress during Clinton's first term weren't all that gay friendly and DADT was implemented so Gays and Lesbians could at least serve where before that they couldn't at all and at no time did anyone expect that 3rd person outing in the military would be used. Also as I said before there was little chance that the Dem controlled Congress which was against Lesbian and Gay intergration at the time would have passed something like that. And Clinton didn't use an executive order becuse he thought it would push the antu-gay Dems and Repubs into writing the exclusion of homosexuals into law, potentially making it harder to integrate the military in the future and overturn DADT which shoudl NOT be as hard aa Obama had made it.

Not a Clinton apologist. he wasn't the best for the LGBT Community. BUT it was a diferent time with different attitdues in Congress and the country. There was nowhere near the approval rating for letting lesbians and gays serve openly as there is today and a major majority of the Congress was against it.