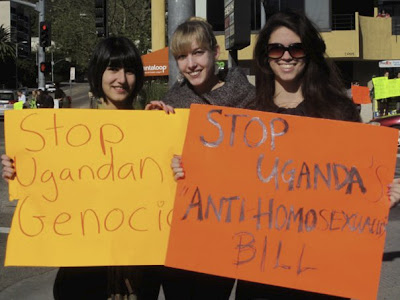 (Students from the Chadwick School in Southern California protest against homo-hate in Uganda. Photo credit: Marisa Melideo.)
A street protest took place in LA on December 22, and it was organized and staged by high school students, gay and straight, focused on a global gay matter, and it gives me tremendous hope for the future of American gay activism with an international focus.

Let's start at the beginning, when I noticed this news brief in the Daily Breeze:

Students from private Chadwick School on the Palos Verdes Peninsula have organized a protest [...] over Ugandan legislation that would broaden the criminalization of homosexuality in the African country.

The draft bill calls for the death penalty for "serial offenders" and those who are HIV-positive, according to international media reports.

The school's Gay Straight Alliance Club has invited adults and students at other local schools and colleges to join in a protest in front of the office of Matthew Crouch, the honorary consul of Uganda in California.

The organizer, Marisa Melideo, had her addy included in the story and I began email communication with her. Marisa sent along these great photos from the December 22nd action: 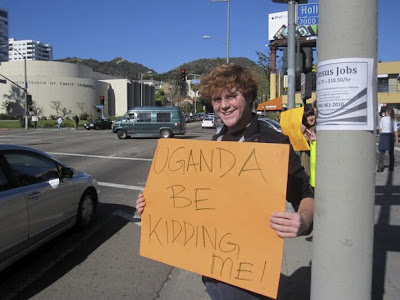 (Looks like the students watch Rachel Maddow and her great coverage on the Ugandan gay crisis!) 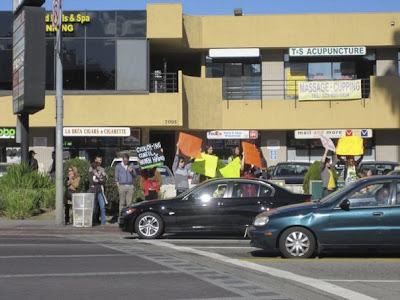 (Students showing their signs to people driving by.)

She shared with me her exchanges with the assistant to Matthew Crouch, a Christian movie producer who is also Uganda's honorary consul in Los Angeles. I strongly approve of all these steps Marisa took to engage the representatives of Uganda. IMO, it's a sign of truly effective activist when she tries several routes to solve, or bring attention to, a political problem:

My name is Marisa Melideo and I'm a student who is writing an article for our newspaper. I was given your email address after calling Mr. Crouch's office as the person I should contact. The article I am working on is an overview of the much debated bill proposed in Uganda. I feel very strongly that this article is fair and bias free considering the fact that many things become sensationalized in the media. Seeing as Mr. Crouch is the Los Angeles representative to the Ugandan Embassy I was hoping that you could provide me with a statement from him regarding his position on the issue. I know that a statement from him would be central to my article which is why I would appreciate a response as soon as possible.


Hi Marisa, Thank you. I will get your message to Mr. Crouch. Please let me know what bill proposed in Uganda you are referring to.


I'm referring to the Anti-Homosexuality Bill proposed. It concerns me that as an Honorary Consul Mr. Crouch has not already formulated a stance on the most widely publicized issue to ever come out of Uganda. Please let Mr. Crouch know that I and many other L.A. citizens are eagerly waiting to hear from him. Thank you.


Thank you, Marisa. Please also let me know what school you attend and the name of your school paper.


I go to Chadwick School in Palos Verdes and am on the staff of Soundings, our school magazine.

Marisa is still waiting for a statement from Aileen, on behalf of Matthew Crouch. The protest on December 22 was at the address listed on the Ugandan embassy's web site as the location for their consul in LA. It turns out that the embassy's information is incorrect. The students didn't verify the location beforehand, and they have learned a valuable activist lesson: personally check out a protest prior to alerting the press.

It is crucial that we recognize the importance of high school students taking the time to hit the streets for gay Ugandans, or gays anywhere beyond our borders. At the same time, let's extend congratulations to Marisa for contacting the consul's executive assistant, making them aware of local concern for gays in Kampala. Kudos also for contacting the press, and taking pics of the action to share with bloggers like me.

Thanks, Marisa and colleagues, and don't stop advocating on behalf of gay people around our small planet.
Posted by Unknown at 3:29 PM
Email ThisBlogThis!Share to TwitterShare to FacebookShare to Pinterest

For kindness from strangers that I never expected.

we're all trying our best in the USA gay community to help stop the anti-homo bill in your country, and show our solidarity. we are with you, my brother.

and it's great that young american gays and their allies hit the streets for gay ugandans recently in los angeles.