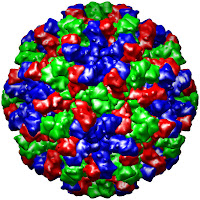 SF Chron: Straight Geeks Sickened by
Potentially Deadly Norovirus
Okay, that is not the headline on the Chronicle's web-posted story today about an outbreak of the potentially deadly norovirus at the Moscone Center, where a technology conference was held this week, but my headline would be much more appropriate for the story, if the Chronicle were to apply the rules it employs when outbreaks of diseases occur in the city and they strike gay men.

It was just four short month back that this lovely headline from the Chronicle, stressing the homosexual angle, set off alarming worldwide stories focusing on the sexual orientation of the staph infection victims:

This was the breathless and alarm-inducing lead sentence:

Compare that to today's story on the norovirus outbreak, which is really an epidemic. When an infection goes from zero cases to dozens, and in a matter of days, that's a classic epidemic underway.

San Francisco public health officials are warning of an outbreak of a virus that has sickened dozens of people at the Moscone Center.

No mention of the victims' sexual preferences is made, even though I imagine there's a higher number of straight geeks than gay ones at the conference, but it doesn't seem of interest to the Chronicle or other news operations to raise the possible heterosexual connection to the outbreak.

The norovirus epidemic at the Moscone Center during the JavaOne Conference, which as a news story has been relegated to the tech news beat, is being treated by many tech reporters and commentators as light-hearted and out to calm any fears of the attendees.

From CNET's coverage of the problem, very representative of other articles:

To clarify, this is a virus that makes you barf and gives you diarrhea. It's not the kind of virus that sends Viagra-pitching e-mails to all your friends or treats you to a Rick Astley sing-along every time you turn on your computer.

Har, har! Straight people can be so comical and apathetic about potentially fatal viral outbreaks it sickens me. Of this I am certain: If there were an outbreak of norovirus among the gay community in San Francisco infecting dozens, we wouldn't see writers taking a goofy look at the outbreak. Instead, we'd have much commentary made that gays have learned nothing from 25 years of the HIV epidemic and don't follow good basic hygiene rules and wash their hands. Oh, and the chance of the disease breaking out into the "general population" would be invoked.

Looking over the growing number of norovirus stories today, it's worth pointing out that none that I've seen have reported the fact that a norovirus infection can kill. In fact, CNET assured readers:

No, you won't drop dead from it.

But you can! Maybe we've been very lucky that no one has died of it from the JavaOne Conference outbreak, but CNET and all news outlets should be giving the true, potentially deadly, facts.

This is from the Wikipedia entry on noroviruses:

The number of deaths from norovirus in the US is estimated to be around 300 each year, with most of these occurring in the very young, elderly and persons with weakened immune systems.

Need I tell you that this deathly estimate would be in every norovirus story if the victims were homosexuals? I guess straight people don't need to know about the statistics of death from norovirus. If reporters covering the San Francisco outbreak need proof that the norovirus can and does kill, they'll find info by clicking here.

Just another day of witnessing a double-standard news approach to diseases in America. One standard applies to homosexuals and their proclivities for picking up and spreading infections, another for heterosexuals when they're the epicenter of a norovirus outbreak.
Posted by Unknown at 5:58 PM
Email ThisBlogThis!Share to TwitterShare to FacebookShare to Pinterest