Polish Cops Protect Gay Marchers;
Nepal's First Gay Assemblymember
There are some positive developments on the international gay front to report this week from the Gays Without Borders group on Yahoo.

First, Polish gay youth activist Lukasz Palucki sends word that Krakow's gay pride event took place on Saturday, April 26, and was a success. Lukasz included a link to TVN 24's coverage of the march and the videos show hundreds, maybe even more than a thousand, of gay celebrants being shadowed by dozens of threatening opponents, while police in riot gear and brandishing rifles protect the gays.

And photographer Stan Baranski was there taking pictures, some of which I've included here. Check out his fantastic blog for more of his dramatic photos of the Krakow march.

From Sunil Pant, we learn that he recently was assigned a seat to Nepal's assembly by the political party he belongs to. In a May 1 article, The Times of India reports the good news, and I very much approved of how the news account sees Pant's political advancement as one part of a large evolution bringing changes to Nepal:

The wind of change that swept through Nepal in the form of a historic election this month, dethroned its king, once revered as god, and instead gave power to the former Maoist guerrillas, will also see a fresh social revolution with the first gay representative being nominated to the new constituent assembly.

Sunil Babu Pant, a 35-year-old crusader for gay rights . . . now becomes part of Nepal's political history as well after being chosen by a minor communist party to represent it in the 601-member constituent assembly.

"We are honoured to send Pant as our representative to the constituent assembly," said Ganesh Shah of Communist Party, who's Communist Party of Nepal-United (CPN-U) has won five seats in the assembly under the proportional representation system.

Pant, a computer engineer from Belarus, founded the Blue Diamond Society in 2002. It is now one of the best known gay rights groups in South Asia, fighting for molested and detained gays, spreads HIV/AIDS awareness, runs a hospice for terminally ill gay patients and provides training and jobs to members of the community.

The newly-appointed gay member of the assembly offered gratitude to his backers and friends:

The support and solidarity I have from locally and abroad will make my job easier and hope the flag of the LGBT communities will continue flying high in Nepal and in other countries too.

Friends and activists like you from all over the world have been my source of inspiration. Thank you and best regards.

Congratulations and the best of luck to you, Sunil! Click here to learn more about his group, the Blue Diamond Society. 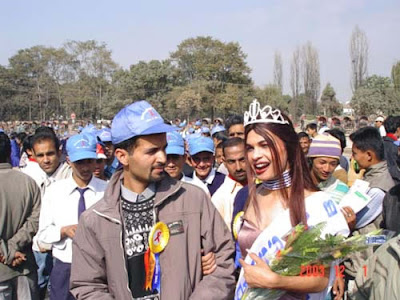 (Sunil Pant, in the blue hat, with transgender activist at a recent Nepalese pride march.)
Posted by Unknown at 11:44 AM
Email ThisBlogThis!Share to TwitterShare to FacebookShare to Pinterest