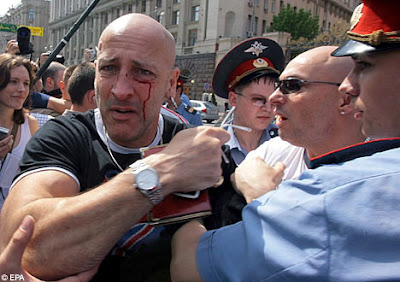 Chicago, NY, SF: May 16-17 Actions for Gay Russians
Gay activists in three U.S. cities will mobilize for vigils on May 16 and 17 for IDAHO, International Day Against Homophobia, and the focus will be to apply pressure on the Russian government to grant all necessary permits to the organizers of Moscow's third gay pride parade, scheduled for late May.

Last year, despite the mayor of Moscow refusing to grant permits to parade, gay marchers from around the world attempted to peaceably take to the streets for equality and tolerance, and were violently assaulted by ultra-nationalist thugs, sending some of the gays, covered in blood, to the hospital. Russian police stood by and did nothing to stop the attacks.

This year, before gay Russians again try to exercise their human rights protections, activists outside the country will send a message to the Kremlin, through vigils at consulates and at gay venues: We are watching how you treat your gay citizens.

Since IDAHO's inception four years ago, advocates in some parts of the world have expanded it to a either a week or month of activities. IDAHO takes place in most cities on May 17, to commemorate the day the World Health Organization removed homosexuality from a list of mental disorders.

For the Americans, IDAHO actions will occur on May 16 and 17. This is the list of U.S. cities standing in solidarity with gay Russians via IDAHO:

"Third Moscow Pride, which will celebrate 15th Anniversary since decriminalization of homosexual relations in Russia, is getting close. As was announced before, this year Moscow Pride will take place on 30-31 May with the public march planned for Saturday 31 May. Any of you who want to take part is very welcome in Moscow.

"Please let us know if any of you are willing to organise public events next to Russian embassies and consulates in your cities in solidarity with Moscow Pride trying to get third Moscow Pride permitted by the authorities. We will be grateful for your support!"

Andy Thayer of Chicago added, "Just because our city lacks a Russian consulate is no reason for us to not stage a vigil. Our speak out and solidarity action takes place in the heart of gay Chicago, and will have an impact. We encourage other activists to organize vigils at Russian consulates or embassies in their cities. And if there isn't one, hold a vigil at your community center or favorite bookstore or cafe."

The U.S. organizers ask that activists in additional cities who plan to demonstrate over IDAHO weekend for gay Russians and their petition for marching permits, to send information about their actions to mpetrelis@aol.com and add their city to list above.
Posted by Unknown at 10:14 AM
Email ThisBlogThis!Share to TwitterShare to FacebookShare to Pinterest

thanks for this, i will alert my blog as well