Dozens "Die-In" at San Francisco ACT UP/Gay Shame Action in the Castro
Under a glorious California sun, more than 75 people gathered today at the crossroads of America's gayest neighborhood to commemorate the 20th anniversary of ACT UP's founding and first action.
After two months of non-stop volunteer organizing by a small handful of members of the newly-formed ACT UP/Bay Area and Gay Shame - A Virus in the System, a crowd of people with AIDS, affordable housing advocates, seniors on fixed incomes, universal health care proponents, including gays/lesbians/bisexuals/transgenders and our allies assembled at Castro and 18th Streets in San Francisco at noon to revive queer/AIDS street activism.
We stayed in front of the BofA building until 12:20 pm, when the crowd was estimated at 50 people. Our police negotiators were not able to secure permission from the five police officers assigned to monitor our action, so we marched up the sidewalk on Castro Street.
Led by gay youth holding a banner that read "Silence = Death, Action = Life. Welcome to the AIDS Eviction Capital. Health Care & Housing for All. ACT UP/Bay Area," we proceed up the street chanting "ACT UP, Fight Back, Fight AIDS!"
At Market Street we turned the corner and continued on to the front of the Coldwell Banker real estate office. Once there, we had more than 75 participants standing around.

We held a brief rally and a few people spoke about our local concerns; people w/AIDS and seniors forced from their homes in the Castro, real estate speculation, the need to get back in the streets, and national issues were also addressed; universal health care, affordable housing for all, money for AIDS and domestic needs, not Bush's wars.
Then everyone was asked to lie down "dead" on the sidewalk, which they did and our marshals drew colorful chalk outlines around their limp bodies.
The die-in lasted ten minutes and as people got up from the pavement, a chant went up: "People with AIDS under attack, what do we do? ACT UP! Fight back! Fight AIDS!"
From start to finish, the short march, speeches and die-in lasted an hour, and there were no arrests made by the cops.
All in all, I'd say the action was a success and heralds a renewed spirit of queer AIDS activism in the streets of San Francisco.
A big thank you to all who helped organize the die-in and much gratitude to everyone who showed up. We couldn't have done it without you!

And be sure to read Andres Duque's report from the NYC ACT UP action today. Click here for his coverage and great pix. 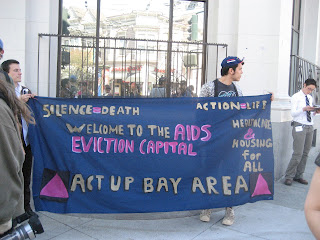 (Gay Shame members at Castro and 18th Streets, with our banner.) 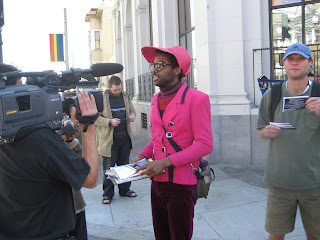 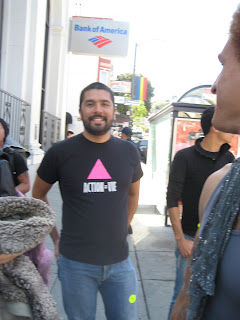 (The cutest cub, and there were a few, at today's action. Should have taken a few more, crisper photos of him and his "ACTION = VIE" tee shirt.) 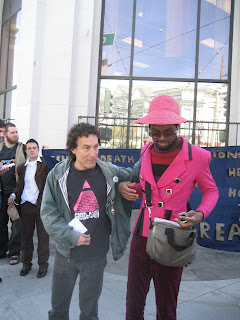 (Veteran activist of many causes, Tommi Avicolli Mecca, on the left, and Mary Ralowe of Gay Shame in her fabulous pink jacket and hat.) 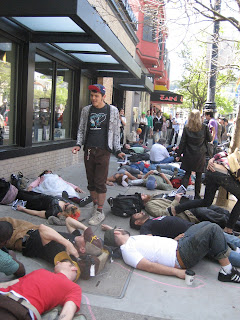 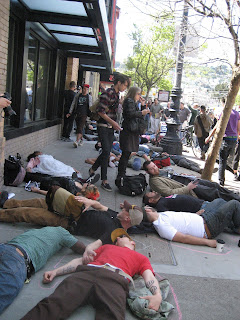 (People lying "dead" on the sidewalk in front of the Coldwell Bank office on Market Street.) 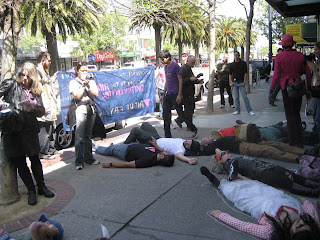 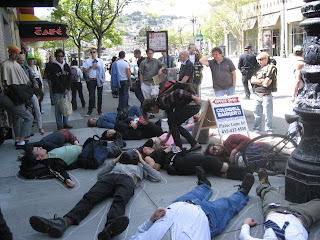 (More "dead" people who died without health care or housing. Notice the Coldwell Banker sandwich board sign, and the chalk outlines around the bodies.) 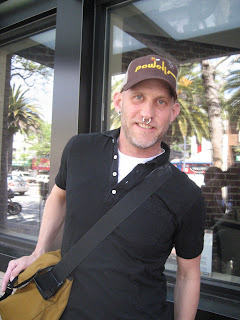 Congrats on a great action and thanks for letting us know what you have been up to! Much love and keep acting up!