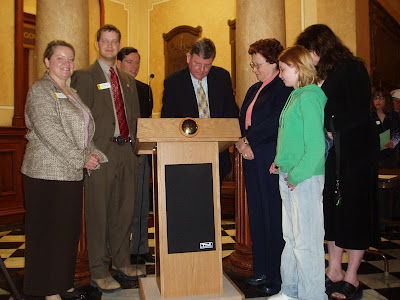 AP: S.F. Gays, HRC, Log Cabin Praise Straight WY GOP Politician
(Photo credit: Dan Zwonizter. A recent bill signing with WY's Governor at the podium. Second from the left is Dan, wearing a red tie.)
My pitch to AP Wyoming reporter Kathleen Miller was basic. The man whose pro-gay equality speech was read around the blogosphere, deserved an AP wire story about the impact of his words on me, gays and our newspapers in SF and the letters he received from people across the globe. Guess I've tired to give Dan the p.r. attention HRC can't be bothered with on his behalf.
As you can see, Miller has written her piece and I believe it does justice to Zwonitzer and his courageous act. Kathleen, I salute and thank you.
A lengthy excerpt:

CHEYENNE, Wyo. - Dan Zwonitzer is both Republican and straight, but the 27-year-old state representative suddenly has found himself praised by gay rights activists nationwide.

Zwonitzer, R-Cheyenne, spoke out in a legislative committee against a measure that would have allowed Wyoming to deny recognition of gay marriages granted by other states or countries.

The committee killed the bill.

"That was the thing that surprised many of us in the San Francisco gay community, that this pro-gay development happened in Dick Cheney's home state."

Zwonitzer told the House Rules Committee on Feb. 22 that he needed to publicly oppose the measure _ even if it cost him his seat _ because he believed that was the right thing to do. He told the committee that gay rights were the civil rights struggle of his generation.

"I will tell my children that when this debate went on, I stood up for basic rights for people," he said.

"Maybe the right thing to do is stand up for tolerance," Lubnau said.

But Zwonitzer, who couldn't vote against the bill because he's not on the committee, is the one who has been receiving the bulk of the attention.

"The reaction was rather surprising," he said. "I'm up to 165 e-mails from people around the country and several internationals, all thanking me for making my stand."

Some things you said earlier:
"I mistakenly thought many people in (Wyoming) didn't support equality for me as a gay man"

So from TV ads we all know Arkansas is "The Natural State" and Missouri is "the Show Me State." Any idea what Wyoming's nickname is? The Equality State. It may be hard to imagine for someone from oh so progrssive California, but Wyoming beat everyone to the punch by being the first state to give women the right to vote. Give us some credit.

"the thing that surprised many of us ... this pro-gay development happened in Dick Cheney's home state."

What does this being Dick Cheney'y home state have to do with anything? His own daughter is gay. He's got a party base to appease by not being openly pro gay rights, but consider his relationship with his daughter.

Now, we do have the unfortunate incident with Matthew Shephard that's still on peoples' minds. People need to know that it was an act that was deplored here and considered a tragedy. The state did what it had to to keep Fred Phelps from putting up his monument.

Wyoming remains rather old fashioned in a lot of ways. Brokeback Mountain wasn't particularly well received here, as people felt it wasn't an accurate view of the state. Said a friend of mine "while there may be a few gay cowboys, there sure aren't a lot." But while we may not espouse a certain lifestyle, most of us are more tolerant than people might think towards people who do.

If you ever moved here, any hostility would be because you are from California, not because you are gay ;) Fix your own environment before talking to us about ours (bastages trying to close Yellowstone to winter travel. A lot of people live on tourism. I don't think California would take kindly to attempts to shut down Hollywood).

That's beside the point though. I'm glad this has opened your eyes some, so maybe you won't be so quick to dismiss us as a bunch of hateful intolerants in the future.