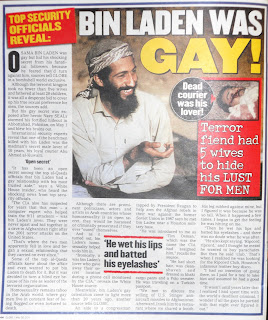 On May 2, I blogged about how soon it would be before we saw stories alleging that Osama bin Laden was gay. The answer is just under three weeks, thanks to the Globe tabloid with the May 30 cover date.

I bought a copy yesterday at the Safeway on Market and Church Streets after noticing the teaser on the cover: Government insider reveals: Bin Laden's Secret Gay Life! There will probably be a San Francisco-gay connection in the story, I thought. Wrong. The tabloid alleges a Houston-gay link dating back to the 1980s.

The Globe's bare-bones web site does not contain the shocking article, so I've key in prime excerpts from it, so more folks can have a few good laughs:

Osama bin Laden was gay but hid his shocking secret from his fanatical followers beause he feared they'd turn against him, sources tell the Globe in a bombshell world exclusive. Although the terrorist kingpin took no fewer than five wives and fathered at least 20 children, it was all desperate bid to cover up his true sexual preference for men, the sources add.

But his gay secret was exposed after heroic Navy SEALs stormed his fortified hideout in Abbottabad, Pakistan, on May 1 and blew his brains out. ...

In true tabloid tradition, unnamed sources are behind the gay rumors and the claim of who was his partner:

International security experts reveal that one of the henchmen killed with bin Laden was the madman's secret male lover of 10 years, his loyal courier Abu Ahmen al-Kawaiti. ...

"The CIA also has suspected for years that this man ... was bin Laden's lover. They were never apart and hid together in a cave in Afghanistan right after the 2001 terror attacks on the United States. That's where the men apparently fell in love and began a sexual relationship that they carried on ever since." ...

Sounds romantic, doesn't it? I wonder if they had Judy Garland CDs to play while they hid in the cave's deep closet. The Globe reveals how long some government insiders have known about the terrorist's secret homosexuality:

An aide to a congressman tapped by President Reagan to help arm the Afghan rebels in their war against the former Soviet Union in 1987 says he met bin Laden near a Houston military base. ... "He had short hair, was clean-shaven and dressed in khaki cargo pants and a Polo sweater. ...

That Polo sweater was a dead giveaway.

"We met to discuss the selling of U.S. Stinger anti-aircraft missiles to Afghanistan. Afterward, I took him to a restaurant where we shared a booth. He leg rubbed against mine, but I figured it was because he was so tall. When it happened a few times, I began to get the feeling he was hitting on me.

"The he wet his lips and batted his eyelashes - and there was no doubt what he was after." ...

Did he also speak with a lisp and flutter his limp wrists while putting the make on the congressional aide? The Globe doesn't say.

"He also kept saying, 'Ripcord, ripcord,' and I thought he meant he wanted to buy parachutes. But then he said 'club.' That's when I realized he was looking for the Ripcord Club, Houston's infamous leather boy disco.

"I had no intention of going there, so I paid for a taxi to take him and assumed he had a great time." ...

Bid Laden couldn't afford the cab fare and was dependent on the aide's small act of generosity to get him to the gay club? Just one more bit of wacky gossip from the Globe and its crazy story.

About the only grain of gay-related truth in the piece is that there is indeed a Ripcord bar for the leather/Levis/S&M crowd. Their web site says they've been around 25-years, proudly serving the local community. If nothing else, the Ripcord got some free (unwanted) publicity out of the Globe story that could have run in the pages of MAD magazine.
Posted by Unknown at 12:39 PM
Email ThisBlogThis!Share to TwitterShare to FacebookShare to Pinterest