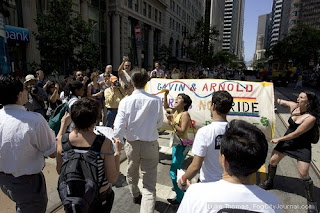 (Mayor Gavin Newsom, center in white dress shirt, is zapped by activists at the SF Pride Parade on Market Street. Photo credit: Luke Thomas, FogCityJournal.com.)
The anger in some parts the gay and AIDS communities over the city and state budget cuts to HIV programs surfaced at the Pride Parade on Sunday, according to reports from the FogCityJournal.com site and the SF Chronicle.

First up, a recap of the action during the parade from FogCityJournal.com:

On the 40th anniversary of the Stonewall riots, LGBT activists and SF Pride-at-Work held a die-in at the San Francisco Gay Pride Parade today in front of Mayor Gavin Newsom’s float to protest his budget cuts to public health. Protestors lay down in front of the Mayor’s float to symbolize deaths that will follow from his defunding of HIV/AIDS services. The action was reminiscent of the ACT UP die-in’s of the 1980’s and 90’s which used civil disobedience to urge a co-coordinated response to fight the AIDS epidemic.

Second, the Chronicle's gossip maven, Leah Garchik, informs us a condiment was tossed at Newsom and his wife, but the symbolic blood missed hitting them:

The huge line ringing City Hall for the after-party propelled us to lunch at Citizen Cake instead. But I heard the party buzz was about the Mayor and the Mrs. getting attacked by ketchup-wielding protesters complaining about budget cuts for AIDS. The mayor's pretty much a hero in the gay community, and the mood as he passed (on the street, shaking hands) was nothing but admiring. And the ketchup missed its exact target (but a mayoral aide said Monday that it washed out easily with water).

Third and finally point, watch a short video of protesters blocking Newsom's vehicle by staging an old-fashioned die-in on the street:

Posted by Unknown at 10:06 AM
Email ThisBlogThis!Share to TwitterShare to FacebookShare to Pinterest

I was horrified that such an aggressive and violent act took place. We don’t tolerate such violent acts from the Religious Right in front of abortion clinics. An apology is due.