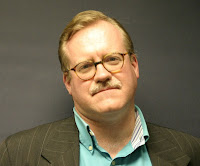 HRW's Gay Iran Report:
Suppressed or Abandoned?
Longtime readers of this blog know that since July 2005, when the world learned of Iran's barbaric hanging of two gay teenagers in Mashad, I have helped organize local and global vigils for the dead youths and in solidarity with LGBT people of Iran.

The biggest obstacle in carrying out that organizing has been Scott Long, researcher for the LGBT division of Human Rights Watch.

He's exerted much energy and time in attacking global LGBT activists since 2005 who dare to not follow his dictates on Iran, including publishing an 18-page grudge report earlier this year. Long's overly detailed report contained the barest minimal criticism of Iran's Islamic rulers, and buckets of scorn for gays with views opposite his.

In a column for Gay City News in July 2006, Long promised HRW would soon publish an important report on LGBT Iranian issues. He vowed to capture the eyes of people in Tehran:

For eight months, Human Rights Watch (HRW) has researched a report on abuses based on sexual orientation and gender identity in Iran, interviewing dozens in Iran and the diaspora, trying to separate fact from rhetoric and rumor . . .

Iran executes more people than almost any other country in the world. Consensual homosexual conduct carries the death penalty.

Yet if there is change, it will start inside Iran. Our report won’t be aimed at audiences in San Francisco or London. The readers that matter most are Iranian lesbians and gays, who are trying to assess their risks and options, and Iranian human rights workers campaigning for basic freedoms . . .

Nearly four years later, the report has still not seen the light of day, and certainly not in Tehran, San Francisco or London. But a democratic, green grassroots reformist movement has ushered in a revolution across the Islamic Republic of Iran, while HRW can't get out its long-promised gay Iran report.

So the question, for me, is this: Is HRW suppressing the report because it's just too troubling and controversial, or, have they simply abandoned it?

Nearly four years is a terribly extended period of time to wait for HRW to deliver on a promise to the LGBT citizens of Irans, and all the other non-Persians who care for their welfare and security.
Posted by Unknown at 9:46 AM
Email ThisBlogThis!Share to TwitterShare to FacebookShare to Pinterest