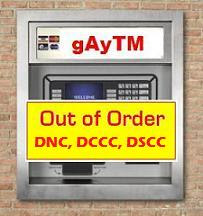 Gay Reps Hosting DC Democratic Fundraiser
on Wednesday With Pelosi
As a gay voter who lives in Speaker Nancy Pelosi's district, and who has been greatly disappointed with her inability (refusal?) to lift a finger on DOMA repeal or speak out forcefully against the torture of gay Iraqis or do a damn worthy thing in the past few years for the LGBT citizens in her Castro district or the nationwide community, I'd sure like to know the answer to one question from my great Gay Inc leaders hosting/supporting or donating to this fundraiser: What the eff has Pelosi done lately to advance LGBT equality at the federal level?

If I still lived in Washington, I'd be organizing a picket to take place outside the home where this fundraiser will happen on Wednesday.

It is time to close the LGBT checkbook and ATM for the Democratic Party, until such time as the party actually delivers some real legislative and presidential-driven changes and advancement for LGBT people.

Here's the invitation for the LGBT fundraiser for Pelosi and the highly unworthy Democratic Party:

Invite you to a reception with

Speaker of the House

At the home of Robert Raben

RSVP to Carmela V. Clendening at:

Thanks to the miracle of SiteMeter, I can see who visits my site, including people from the White House. Nice to know the staffers at 1600 Pennsylvania Avenue check out my site, and all the other fab LGBT blogs holding the White House, HRC, the DNC, and Congress accountable for unkept promises made to us. Let's keep up the blogging heat! 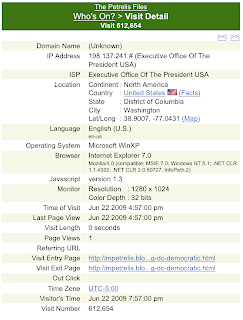 Posted by Unknown at 4:22 PM
Email ThisBlogThis!Share to TwitterShare to FacebookShare to Pinterest

If the Democrats had spent this much time working towards LGBT equality instead of trying to save the DNC LGBT Fundraiser, we might have actually some equal rights. Instead, we continue to be shut-out of the Constitution.

Now shut-out the DNC-LGBT Fundraiser and Boycott it. Or better yet, protest outside.

Perhaps it is time for you folks to look to the Canadian example. Our Prime Minister took a huge political chance and not only supported civil rights for the LGBT community but also forced his rather recalcitrant representatives in our parliament to do so as well. It is time for your President to step up and do the same. My fear for you folks is that you don’t have a guy with the same integrity that we did. Sorry but its looking like the Clinton years all over again for the LGBT community.

The Dems have had control of Congress since '06, and now the WH, yet "the community" continues to get such short shrift, even as almost all of the self-appointed leadership insists that we all breathlessly support the Dems and demonize any and all Republicans.

With "friends" like the Dems... maybe it's time for more LGBT folks to consider the Libertarians?

As one of the hosts of the above event, I have no regrets for supporting the Democratic Party or Speaker Pelosi.

I do regret hosting an event with Rep. Jared Polis, given his subsequent vote against national health care.