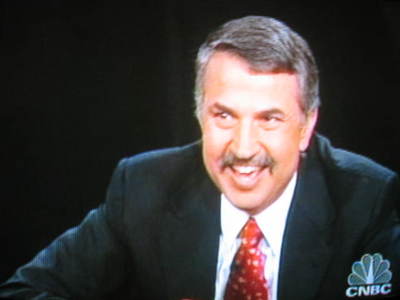 The New York Times on September 20 printed a story about the Iraq Study Group's recommendations on security issues in the war-torn country and some attention was given to the people who met with and advised the group:

The group, formed at the request of Congress and with the approval of the Bush administration, visited Iraq for four days this month. Members said they had met with more than three dozen Iraqi officials, including Mr. Maliki. The group has also met with Mr. Bush, Vice President Dick Cheney, Secretary of State Condoleezza Rice and Defense Secretary Donald H. Rumsfeld. Panel members expect to meet soon with an Iranian official, whom they did not identify, with the Saudi ambassador to the United States and with the foreign minister of Syria.

What the Times failed to report was that the Iraq Study Group also consulted with New York Times foreign affairs columnist Thomas L. Friedman and he wasn't the only journalist who met with the group.

The Iraq Study Group has posted a document listing all of the people they spoke with, including American and Iraqi politicians, generals, charity executives and writers.

What fascinated me about the list of names was the fact that in addition to Friedman, the group also sought advice from other journalists, including Thomas Ricks and George F. Will of the Washington Post, George Packer of the New Yorker magazine, Mark Danner of the New York Review of Books, and William Kristol from the Weekly Standard.

While there may be nothing ethically wrong with journalists consulting with U.S. advisory panels, I firmly believe the Times has a journalistic responsibility to inform readers when reporting on such panels that a Times columnist, and other journalists, gave advice to the panel that is offering suggestions about Iraq to President Bush and Congress.

At the same time, I wish media ethicists would weigh in on whether it is ethical for columnists and journalists to give advice to any government advisory panel, and what duty the journalists and their employers have to inform readers when such advice is offered to such panels, even if the journalists don't write about their talks with the panels.

Bottom line for me? Better for the Times and other publications to err on the side of full transparency and disclosure regarding who's giving advice to the Iraq Study Group.
Posted by Unknown at 9:33 PM
Email ThisBlogThis!Share to TwitterShare to FacebookShare to Pinterest

That's fascinating, given that last Sunday the NYT book review surmised that "Web sites, ... [undermine] the authority of editors, whose expertise was meant to act as a filter against nonsense or prejudice."

Sounds like NYT editors have a pretty good filter, there.

I comment on the editor issue at my place. Congrats on the C&L link.

At minimum, NY Times readers are entitled to know that he met with them. Otherwise, I personally don't see a problem with their meeting with him, as he may know something worth knowing about the subject.