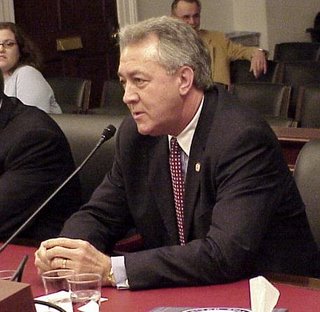 I really don't wish to cast aspersions on all of Congressman Alexander's staffers and former pages, but it strikes me as odd and ironic that before his ex-young adult male page precipitated Mark Foley's resignation from the House, an aide to the congressman was canned for corresponding with Scott Peterson and I wonder if anyone now working for Alexander is sending letters or emails that could get them fired or force another politician to retire.

The page worked for Rep. Rodney Alexander, R-La., who said Friday that when he learned of the e-mail exchanges 10 to 11 months ago, he called the teen's parents. Alexander told the Ruston Daily Leader, "We also notified the House leadership that there might be a potential problem," a reference to the House's Republican leaders. [...]

And this is excerpted from a September 6 A.P. dispatch:

An aide to U.S. Rep. Rodney Alexander was fired for reportedly corresponding with convicted killer Scott Peterson while on the job, the congressman's office said Wednesday.

The Louisiana Republican fired Theresa Mares in mid-August, said spokesman Adam Terry. Mares had worked for Alexander since he first took office in 2003 and was a caseworker in the congressman's Alexandria office in central Louisiana.

Terry said Alexander decided to fire Mares because she was "using government resources to personally communicate with Scott Peterson."

"Ms. Mares' actions have been embarrassing to our office and demonstrate that her views are politically incompatible with those of the congressman," Terry said. [...]

What qualifications must someone posess to get a job with Rep. Alexander or work for him as a page? Willingness to correspond with killers or closeted gay politicians?
Posted by Unknown at 7:03 PM
Email ThisBlogThis!Share to TwitterShare to FacebookShare to Pinterest