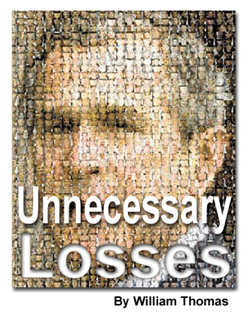 With such statistics as these for American, United Kingdom and other countries' forces in the Iraq war climbing every day, not to mention the always-rising estimated number of Iraqi civilian deaths, I so much believe now is the best time for the U.S. to contemplate changing our course of action over there.

The Iraq Casualties web site and the Pentagon, icasualties.org and dod.mil, have updated their numbers with new statistics the White House probably prefers not receive much attention from the media and general public.

For number of deaths of coalition forces from the U.S., the U.K. and our partner countries, the figure is now at 2,901.

And the new number for Iraqi civilians deaths is at 12,616, and that is a very conservative estimate, while the figure for number of Iraqi police casualties is 5,361.

The Defense Department's latest number of American troops "WIA not RTD," which stands for wounded in action and not returned to duty, reached a grim milestone.

As of September 8, 2006, there have been 9,062 of our service men and women wounded so severely they could no longer perform their duties. And 10,883 were wounded in action and returned to duty.

Staying on this course is not a serious option for this American voter.
Posted by Unknown at 6:38 PM
Email ThisBlogThis!Share to TwitterShare to FacebookShare to Pinterest

The worst thing that has happened to this country is the bush administration.
His wrong decisions has cost thousands of lifes.

The worst thing that has happened to this country is the bush administration.
His wrong decisions has cost thousands of lifes.