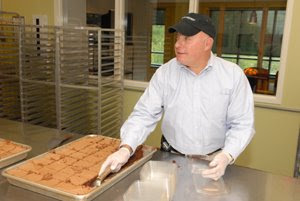 WPost: AIDS Exec Gets 4% Pay Raise;
Cuts Food and Supplements to Patients
The story about Craig Shniderman, the very nicely compensated executive director of Food and Friends, which began in June with a few entries on this blog and excellent stories in the Washington Blade, has picked up steam today thanks to a terrific article on the front-page of the metro section of the Washington Post.

From Philip Rucker's story in the Post this morning:

The cuts come as the District-based charity is facing criticism from some donors, AIDS activists and nonprofit group watchdogs, who say the compensation awarded to the group's longtime chief is too high.

Food & Friends paid Executive Director Craig M. Shniderman $357,447 in salary and benefits last year, and Shniderman, 60, said his salary has increased 4 percent this year. "Food & Friends compensates all of the staff appropriately, and that compensation is not, shall we say, fluctuated according to the momentary circumstances," he said . . .

"[Schniderman's compensation] appears excessive in relation to other nonprofits in related fields," said Daniel Borochoff, president of the American Institute of Philanthropy . . .

"This is way out of whack, and the board really ought to have a heart-to-heart conversation with him," said Doug White, a nonprofit management adviser and author of "Charity on Trial," who reviewed the group's records at The Post's request.

So far, more than 50 comments have been left on the comments page for this story, and an overwhelming majority of the messages are critical of Shniderman's compensation.

The Post story has also generated interest from the Washington Grantmakers Daily, a blog devoted to tracking nonprofits in the DC area:

How much should a nonprofit executive be paid? I don’t know the answer, but I do know it’s not a fun day to be Food & Friends’ CEO or on the F&F board of directors (WaPo, 7/17). ”Out of line” executive compensation, and what one blogger called the ”strong CEO/weak board syndrome,” were hot topics about nine months ago, after the release of the 33 Principles for Good Governance and Ethical Practice for nonprofits, which didn’t address those issues.

Washington's alternative weekly, the City Paper, also weighed in today the Post article and Shniderman's very comfy salary. With the City Paper writing on the Food and Friends' director's greed, the compensation story has now appeared in the gay, mainstream corporate and alternative weekly press, showing that coverage of AIDS nonprofits and important accountability issues cuts across many political and news media boundaries.

Excerpted from the City Paper's blog:

Is it me? Were you shocked over the Food & Friends honcho’s salary revealed in today’s Post? Executive Director Craig M. Shniderman makes $357,447 . . .

Schniderman makes more than most if not all agency heads in the city. And he runs a non-profit. That simply feeds people . . .

Schniderman’s defense to the paper of record: His salary increased just 4 percent this year. So let me get this straight. He’s been making this huge salary for a couple years now. That’s not much of a defense.

Hey, Craig Shniderman and the board of directors at his fiefdom: The City Paper hits the nail on the head. Your defense for the $357,000 compensation is extremely weak. Do the smart thing. Reconsider cutting Craig's salary, an undoing the cuts in food to people with AIDS and other illnesses, if only because it would generate some good P.R. for your organization, and it can use some positive media coverage.
Posted by Unknown at 10:45 AM
Email ThisBlogThis!Share to TwitterShare to FacebookShare to Pinterest

The board should be getting whipped. Schniderman should be replaced by someone at less than half that salary. C'mon, $150K is a pretty good gig. $350K+ for a non-profit is absurd.

Thanks for posting this. I just got a fund raising letter in the mail today from Food and Friends. I plan to withhold my donation until this gets resolved. However I will continue to volunteer.